Reading this much of a critic’s work will also alert you to his tics. Lane has only one that annoys me: He will cross the street, walk around the block, catch a cross-town bus and wait in line for an hour to make a dopey pun, and unfortunately we are forced to go with him. For the pun-averse this can sometimes feel like engaging in one of those seemingly straightforward conversations that turns out to be the wind-up for an evangelical pitch or an obscene phone call; you wonder if Lane has enticed you through a whole paragraph on “Braveheart” solely so he can hit you with a groaner like “Fast, Pussycat! Kilt! Kilt!”

Shakespeare with his excellencies has likewise faults . . . A quibble is to Shakespeare, what luminous vapours are to the traveller; he follows it at all adventures; it is sure to lead him out of his way, and sure to engulf him in the mire. It has some malignant power over his mind, and its fascinations are irresistible. Whatever be the dignity or profundity of his disquisition, whether he be enlarging knowledge or exalting affection, whether he be amusing attention with incidents, or enchaining it in suspense, let but a quibble spring up before him, and he leaves his work unfinished. A quibble is the golden apple for which he will always turn aside from his career, or stoop from his elevation. A quibble, poor and barren as it is, gave him such delight, that he was content to purchase it, by the sacrifice of reason, propriety and truth. A quibble was to him the fatal Cleopatra for which he lost the world, and was content to lose it. 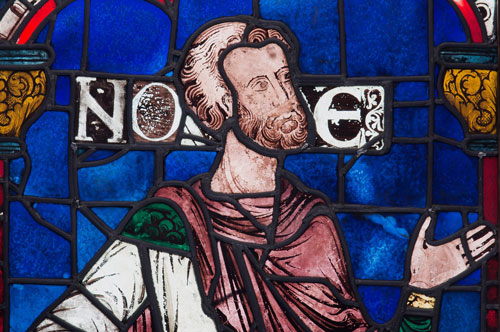 Over at the Paris Review Daily, I write about the misrepresentations of Biblical vegetarianism in Darren Aronofsky’s movie Noah.

(The image above, of Noah in a characteristically talky pose, is from a stained glass window temporarily removed from Canterbury Cathedral during restoration work and on display in the exhibit Radiant Light in New York City’s Cloisters until May 18.)