“A slow, beautiful look at the process of assembly, destruction, and revision specific to coming of age. It captures the Herculean task of forging one’s own definitions of success and authenticity.”

One of the best books of the year: Wall Street Journal • Salon • Flavorwire • Slate • Buzzfeed • the editors of FSG

“A powerful entry in the great fictional exploration of the meanings of liberation.”

“Those who have wandered will recognize how poignantly Crain distills the essence of that time.”

“Writes his characters and settings so well, with such precise attention to physical and psychological detail, that the reader feels introduced to a small world of people and places.”

“A new sort of model for contemporary fiction.”

A video for the novel, created by Brian Spinks:

“In its rich and elaborate depictions of a time and a life, of character and growth and pain, and in its psychological curiosity and emotional rigor, Necessary Errors is a rarity—a brave, humane, dignified novel of eros and youth in the shadow of history.”

—Donald Antrim, author of The Afterlife

“Caleb Crain has written a novel of surpassing intelligence and unexpected beauty about a young American’s year in post-Communist Prague—and about how we find, and construct, the story of our lives. His great achievement is to make the unfolding of Jacob Putnam’s newfound sexual freedom resonate with the unfolding of Czechs’ new historical freedoms, so these separate arcs seem of a piece. His precision of description, whether of architecture or emotional weather, is enviable; his dialogue both playful and profound. It is rare to read a book of this length and feel that every sentence mattered, rarer still to finish a novel of such intellectual depth and be so moved.”

—Amy Waldman, author of The Submission

“Caleb Crain describes a young man’s and a country’s first tastes of freedom with a lucid and matter-of-fact intelligence. Necessary Errors offers an invaluable record of Prague at the beginning of the 1990s in a style that places it among the great novels of Americans abroad. It’s The Ambassadors for the generation that came of age with the downfall of the Soviet Union.”

—Marco Roth, author of The Scientists

“Caleb Crain’s beautiful novel is a real feat of memory and invention, which captures the feeling of being young, sensitive, and vaguely but intensely ambitious better than anything I know in recent fiction. Everything in Necessary Errors feels both transitory and indelible, and isn’t that the way?”

“I’ve long admired Caleb Crain’s writing, and Necessary Errors is a tender, immersive, insightful novel. Its author builds with affection a world large and small—of early-nineties Prague, gay nightlife, the hardships of laundry, the penumbra of post-Soviet capitalism, beer versus tea, intense expat friendships, a hamster who lives in a pot, and the hopeful stages of love.”

—Chad Harbach, author of The Art of Fielding

“It is rare, and most welcome, to read a first novel with as much elegance, intelligence, humor, and tenderness as Necessary Errors. It is also rare to read any novel that creates this much beauty with such a light but sure touch. An exquisite debut.”

—Stacey D’Erasmo, author of The Sky Below and A Seahorse Year

“As someone who is often unduly nostalgic about having been in her twenties during the 1990s (though not for as good a reason as having been in Prague during the aftermath of the Velvet Revolution), this novel triggered something like a sense memory. Caleb Crain is remarkable at capturing that time in life when ambition and longing are at once all-consuming and all over the map. I winced in self-recognition more than once—and marveled at the author’s insights more often than that.”

—Meghan Daum, author of My Misspent Youth
and Life Would Be Perfect If I Lived In That House

“I don’t know that I’ve ever read a novel that gets down, the way this one does, how it felt to be an American and a gay man at the end of the Cold War—so exiled from the country you grew up in that you go abroad to make a new world. Caleb Crain’s Necessary Errors is an adventure of the head and heart. His hero, Jacob, turns to the cafes, bedrooms, and libraries of newly free Eastern Europe, an American in search of a European Bildungsroman, in search of love and possibility both.”

“Youth and innocence—remember them? Caleb Crain’s Necessary Errors stabs the heart with the story of Jacob Putnam’s sentimental education in Prague, and reminds us that to be young is to live abroad in a fallen empire where the talk goes on all night, the dumplings are sliced thick, and blue jeans are rare and too expensive. Pick this novel up and you won’t forget it.”

—Benjamin Anastas, author of Too Good to Be True 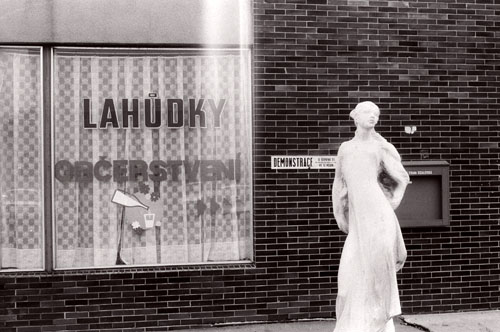 An (imaginary) extra-illustrated edition of the novel, including photographs, postcards, and ephemera, is available on the blog Steamboats Are Ruining Everything.