[An issue of my newsletter Leaflet]

“In spring everything becomes drowsy. The cat forgets to chase the mouse, and men forget that they have debts.” —Sōseki, The Three-Cornered World

I’ve been interested in Sōseki since reading, a few years ago, a Penguin translation of his 1914 novel Kokoro. Something about its plainspoken, depressive, somewhat crypto-gay view of the world spoke to me. A month and a half ago, I read his 1915 novel Grass on the Wayside, his only novel drawn directly from his life. It’s about a man in early middle age who has returned to his wife and children in Japan after a long sojourn abroad. The bonds between him and his young family seem damaged, and both he and they seem ambivalent, even reluctant, about letting the bonds heal. The bickering between him and his wife is fierce. He’s having trouble finding his way back into his professional life—money is a problem. And then his former adoptive father shows up, saying he wants to adopt him again. It’s a confusing request. The older man may only be asking for a handout, now that the protagonist has secured a place for himself in the world, however tenuous.

Their relationship is a little hard to explain, I think even to Japanese readers. Like Sōseki himself, the protagonist of Grass on the Wayside was given up for adoption by his natural parents at a very young age, for reasons unclear, and the placement was in many ways an unhappy one. “He did not mind so much being owned physically,” Sōseki writes, of the protagonist’s feelings about his adoptive parents, “but even his childish heart grew fearful at the thought of becoming emotionally enslaved to them.” The placement hadn’t lasted. After his adoptive father left to live with a new girlfriend, the child was returned to his biological parents, who took him back only grudgingly. It’s understandable that the novel’s protagonist wishes for the dispiriting, humiliating story to stay in the past. He owes nothing to the man, everyone around him repeats. To protect his finances, to keep his emotional balance, he really has no choice but to turn the man away. The problem is, some of the most vivid memories of his childhood are associated with this adoptive father.

The two of them often went out boating, accompanied by a boatman dressed in the traditional straw skirt. When they were some distance from the land the boatman would cast his net, and Kenzo [the protagonist] would watch the gray mullet with their silver scales dancing frantically as they were brought to the surface. Sometimes the boatman would take them three or four miles out and catch gilthead. On such occasions the boat rocked so much that Kenzo could hardly keep awake. He enjoyed himself most when a swellfish was caught. As it puffed up in anger Kenzo would tap it with a chopstick as though it were a drum.

If the protagonist has any pleasant childhood memories associated with his biological father, in the novel they go unmentioned. Turning his adoptive father away, therefore, is an act of mourning, made more bitter and more complex by a perceived social obligation to deny that there is anything to mourn.

The character takes out some of his bitterness on his very young daughters, whose appearance he disparages. “One ugly child after another, and to what end?” he complains. The outburst seemed a little shocking to me, in such an openly autobiographical novel—didn’t Sōseki worry about what his actual daughters would think?—and last month I read John Nathan’s 2018 biography of Sōseki, in part because I wanted to know more about the relationship here between fiction and reality. It seems that Sōseki struggled with mental illness all his life and went through periods of believing that those closest to him were persecuting him. Several of his children were to recall him as irritable, unpredictable, and violent. Though Nathan’s inclination as a biographer seems to be to honor his subject, he seems thrown by the cruelty that Sōseki showed his family. In letters to his wife, for example, he reprimanded her harshly for what he perceived as her baldness and bad teeth. Perhaps the best that can be said is that Sōseki did not leave much of his own moral ugliness out of the portrait that he drew of himself in Grass on the Wayside, in which the husband is decidedly not more sympathetic than the wife (confusingly, Sōseki did omit from his novel the paranoid delusions that he experienced, which might have extenuated the moral ugliness), and that it and Kokoro still feel to me like groundbreaking, moving works, despite my knowing more about his personal shortcomings.

“There is not a single Western dish, with perhaps the possible exception of salad and radishes, which could be said to have an attractive color. What the nutritional value is I am unable to say, but from the artistic point of view, their food is extremely uncivilized.” —Sōseki, Three-Cornered World

There is more pathos, though again much sorrow, in the episode in Sōseki’s life just prior to the unwanted return of his foster father. In 1900, after Sōseki had become a successful professor of English literature, popular with students despite his rigorous demands on them, his employer, the Japanese government, ordered him to study English-language pedagogy for two years in London. Perhaps sensing that he lacked the psychosocial wherewithal to thrive on his own abroad, Sōseki tried to get out of it, but the ministry of education only relented to the extent of allowing him to study literature rather than language pedagogy. “The two years I spent in London were the most miserable time of my life,” he later wrote. “Among the English gentlemen, like a stray dog mixing with a pack of wolves, I eked out a pathetic existence.” He contacted and studied with several English dons but did not make a meaningful connection with any of them. His stipend from the Japanese government was inadequate, and in search of quiet, clean lodgings, he moved many times. He socialized little. Perhaps in an attempt to justify his isolation, he complained repeatedly in his diary that his command of English language and literature was better than that of native English speakers around him. “I mostly stay alone and lose myself in my reading,” he wrote to his wife. He bought four hundred volumes of English literature, including Spenser, Burney, Austen, Meredith, and James, and read incessantly, almost self-punitively, as if trying to cram into himself a knowledge of all English literature in just two years. Two landladies of his told a visiting Japanese colleague that he “stayed in his room for days on end, weeping in the darkness,” Nathan writes. Reports reached the Japanese ministry of education that he had gone insane.

Upon his return to Japan, Sōseki was so unwell, psychologically, that his wife took the children and moved in with her parents for two months, for safety. This was the period fictionalized in Grass on the Wayside. Despite his illness, he was able to keep up a public front, and he taught Johnson, George Eliot, and Shakespeare to great acclaim at a higher school and then at Tokyo Imperial University. But what was he looking forward to? It must have seemed to him that he was condemned to spending the rest of his life teaching and studying the literature of a country where he had been deeply unhappy. But then, in late 1904, inspired by Laurence Sterne, he began a satirical novel told from the point of view of a cat (which, full disclosure, I haven’t read yet). It was a hit. Two more novels quickly followed, and in 1907, Japan’s largest-circulation newspaper offered to pay him a monthly salary to print his future novels in serial format. He left the academy and spent the rest of his life not studying English literature but remaking Japan’s.

This Sunday at the Brooklyn Book Festival, I’ll be moderating “Occupy and Resist,” a panel about politics and literature, featuring the writers Sayed Kashua (author of Native), Imbolo Mbue (author of Behold the Dreamers), and Magdaléna Platzová (author of The Attempt). Please come! It will take place at noon on Sunday, September 18, in the Borough Hall Media Room, 209 Joralemon St., Brooklyn.

I reviewed Gregory Woods’s Homintern, a survey of homosexuals in the arts during the 20th century, for the 7 May 2016 issue of The Guardian. 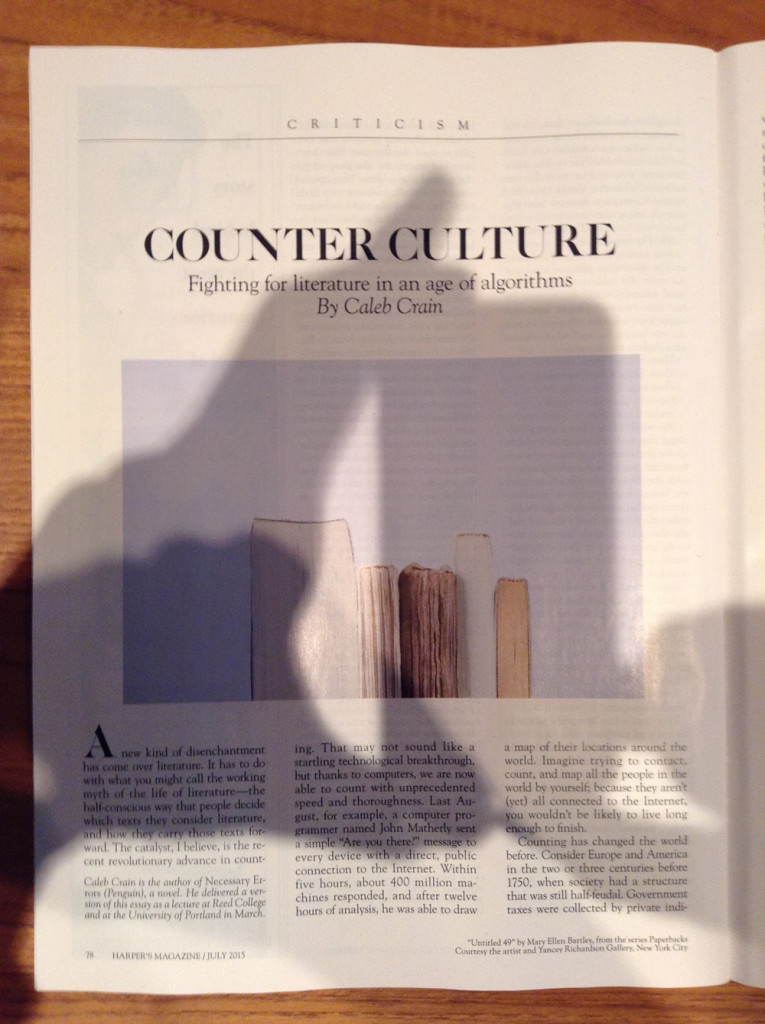 I’ve got an essay in the July 2015 issue of Harper’s, titled “Counter Culture: Fighting for Literature in an Age of Algorithms.” It seemed appropriate to offer as a preview a photo of the essay taken on my Ipod Touch.

In the first chapter of American Sympathy, my 2001 study of the literary representation of affection between men in the antebellum United States, I wrote about two genteel Quakers in late-18th-century Philadelphia who kept diaries recording their romantic friendship. Their names were John Fishbourne Mifflin and James Gibson, and they went by the cognomens of Leander and Lorenzo, respectively. Gibson’s diary and the second volume of Mifflin’s were, and still are, in the archives of the Historical Society of Pennsylvania. (Here’s a link to the catalog entry for the physical diaries, and one page of Leander/Mifflin’s diary has been digitized and is available online here. Rather cleverly, the page that the archivists chose to digitize is the one where Leander/Mifflin begins to describe a rather erotic dream that he had about Lorenzo/Gibson.)

I also had access to the first volume of Leander/Mifflin’s diary, through a photocopy that was loaned to me. This photocopy had been made by a bookseller decades earlier, while appraising a private individual’s collection. For safety’s sake, before returning this photocopy, I made a photocopy for myself. This turned out to be prudent, because the first-generation photocopy that I returned was later lost, and although the person who was thought to be the owner of the original manuscript graciously granted me permission to publish, he later told me that he had never been able to locate the original in his collection. Perhaps the bookseller had been mistaken in his memory of who owned the original. In any case, the second-generation photocopy that I had made became the only copy available to scholars.

Over the years, I sent reproductions of the photocopy to any scholar who asked, including Richard Godbeer, who wrote about the diarists in The Overflowing of Friendship (2013), and Sarah Knott, who wrote about them in Sensibility and the American Revolution (2009), but it made me nervous that I hadn’t made any provision about putting the photocopy into an archive somewhere. When my father-in-law passed away this January, I was reminded of the propriety of taking care of these things sooner rather than later, and at last I emailed the Historical Society of Pennsylvania to ask them if they would take custody of the photocopy. I’m happy to report that they said yes, I sent it, and it arrived safely. It doesn’t seem to be in their online catalog yet, but it’s there, if any scholar wants to consult it.

Of course I made a third-generation photocopy for myself, before I put the second-generation one in the mail.