Brandeis professor and old friend John Plotz interviews me on the Recall this Book podcast about 9-year-old Daisy Ashford’s comic novel The Young Visiters. Please check it out!

The interview is part of getting out the word about B-Side Books, an anthology edited by John of short essays about underappreciated novels, to which I contributed. 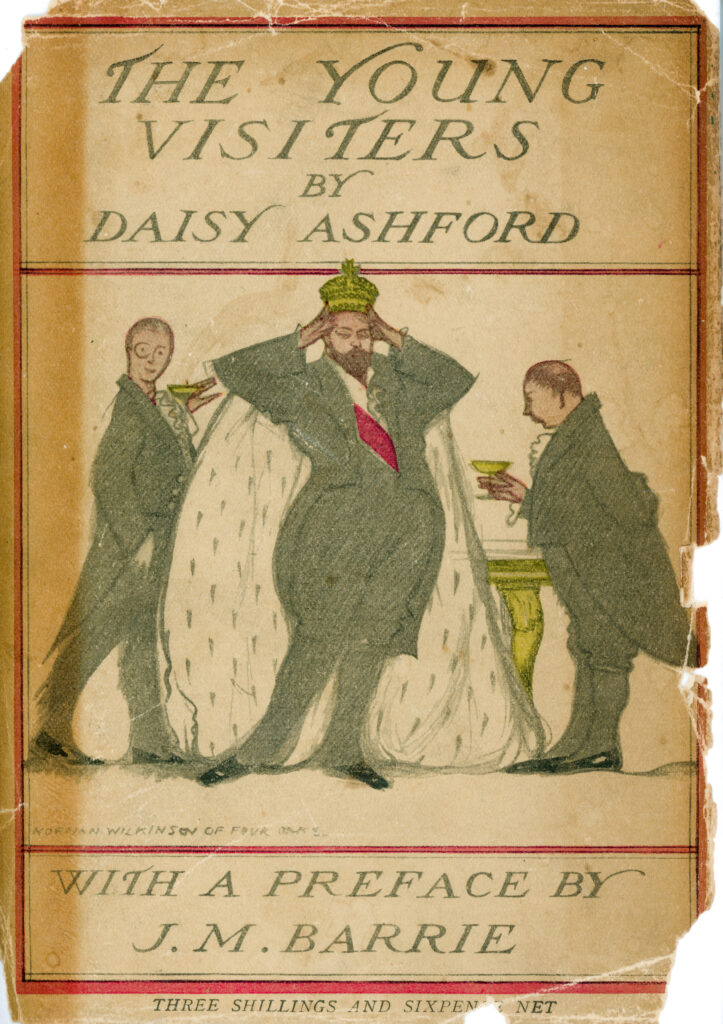 The sixth and final children’s poem of half a dozen that I wrote many years ago.

Hair of the Dog That Bit Me

I gave my Spot a brushing;
He shed a lot of hair,
So much that when we finished, a whole
Nother Dog was there.

The Nother Dog was shadowy.
Its soul was black as fur.
Spot barked hello. It growled out
A snarly, wolfish grr.

We found Spot’s tug-me toy and gave
The Nother Dog an end.
The Nother phoned for take-out: beets
And carrots, julienned.

I offered it the kibble
To which my Spot was used.
The Nother Dog preferred to read
Six books by Marcel Proust.

Biscuits were available
To dogs who learned to sit.
The Nother Dog liked biscuits, but
Instead of sit, he bit.

“Enough!” said I. “Arf-woof,” barked Spot.
“This Nother Dog can’t stay.”
We turned the ceiling fan on high
And let it blow away.

Spot played with his tug-me,
And didn’t bite my hand.
He ate kibble, till we both agreed
That life was kind of bland.

He fetched the brush, and soon we coughed
In tickly, furry fog.
But when the fur had settled—
A whole ‘nother Nother Dog!

The fifth of half a dozen children’s poems, written by me a dozen years ago.

A Taste for Power

Alexander was a fly.
His eyeballs were metallic.
His wings had scales like dragon’s wings.
His friends knew him as Aleck.

He liked to boast that in the swamp
The lordliest was he,
Insect emperor of all
The sludge that he could see.

“Aleck the Great am I,” he sang,
But when his song was sung,
A low voice croaked, “There comes a day
when every king has kung.”

The croaker blinked his bulbous eyes.
Tongue lassoed out like fate.
He said, “Since eating made me king,
Please call me Aleck-ate.”

Aleck-ate, the Lotus King,
Gave low, burplike decrees,
That belched across the waters
To frogs on bended knees.

But a visitor with glassy eyes
and underwater smirk
Gurgled, “Empire looks to me
Like a tasteful line of work.

“Your deed was great,” the visitor hissed,
“But my deed shall be greater.
You may be known as Aleck-ate,
But I am Aleck-ate-er.”

Fourth installment of a set of children’s poems I wrote a dozen years ago.

O ancestors! Please hear my cry.
I’m eighteen summers old.
I need a wife, but evolution’s
Left me in the cold.

I’m the last Neanderthal.
I have some woman friends—
Nice-looking, others tell me—but
They’re Homo sapiens.

I’d like to meet a girl like Mom
With a rich potato form.
These sapiens are willowy;
They don’t look very warm.

A woman looks her best, I think,
With low, protruding brow,
But the female forehead fashion
Is high and flat right now.

A lady’s lower jaw should sink
Delicately in.
Beneath their lips, these girls have got
A pointy, prickly “chin.”

A sideways egg’s the pretty shape
That suits a female skull.
But modern girls have heads as round
As the moon does when it’s full.