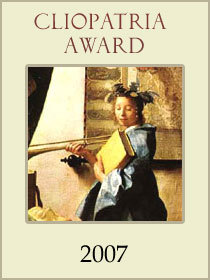 I’ve just learned that the History News Network’s group blog Cliopatria gave its “Best Writer” award for 2007 to Steamboats Are Ruining Everything. Many thanks for the honor! Since there’s a danger that visitors from Cliopatria might come here looking for my posts about history and find only literacy statistics, I’ll list here a few of my history-related posts from 2007.

I’ll add, since I’m unlikely to have another occasion for such retrospection, that the posts of last year that meant the most to me in the writing of them were personal rather than history-related: Treed, 30 July 2007 and Lota, 1996-2007, 15 December 2007. And according to my admittedly impressionistic counting of “hits,” the most popular post I wrote was literary-critical: Turgenev: The Translation Game, 3 May 2007.