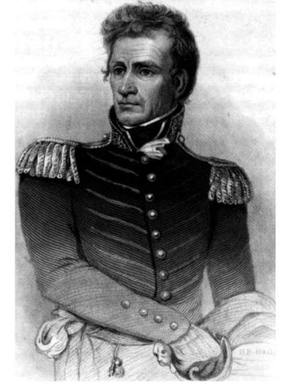 "Bad Precedent," my essay on Andrew Jackson and habeas corpus, appears in The New Yorker on 29 January 2007. As with earlier articles, I'm posting here a few outtakes and tips of the hat.

As ever, I owe the most to the book under review, Matthew Warshauer's Andrew Jackson and the Politics of Martial Law: Nationalism, Civil Liberties, and Partisanship (available from Amazon and, for the same price, directly from the University of Tennessee Press).

I also learned much from three recent biographies of Jackson, very different in style and perspective. Jackson provokes feelings of surprising intensity, considering that he's a long-dead historical figure, and a great virtue of H. W. Brands's Andrew Jackson: His Life and Times is that it explains the sturm and drang around him in a calm, careful tone. Brands relies for the most part on published sources and doesn't offer new archival discoveries, but he places Jackson in context with impressive clarity, and his narrative is well constructed. (My only quibble is with his reliance, in a few places, on anecdotes about Jackson's early life from an early-twentieth-century account by Augustus C. Buell; Buell's stories were probably fiction, the scholar Milton W. Hamilton asserted in the Pennsylvania Magazine of History and Biography in 1956. Of course it's possible that Brands has found reason to dissent from Hamilton's athetization. . . .)

Brands offers a generous but highly readable 600-plus pages. Sean Wilentz's Andrew Jackson, by contrast, is as lean and sinewy as Jackson himself. It also shares with Jackson an appetite for controversy: at 195 pages, Wilentz's book is designed for the reader who wants an introduction to Jackson in the course of an afternoon, but Wilentz manages nonetheless to find room to mount a sophisticated defense of Jackson from attacks by other historians—attacks which, he argues, fail to take account of the political realities of Jackson's day. Among others, Wilentz critiques Andrew Burstein, who, in The Passions of Andrew Jackson, condemns Jackson harshly, as a person and as a leader. Burstein's isn't a straight biography, but rather a study from a perspective that's a little hard to describe—a mixture of social history, psychology, and cultural studies. Burstein scants the political context, which is a rather large piece of the puzzle to leave out. Still, Burstein seems to have immersed himself in the primary sources, and presents evidence, often highly colorful, that is not easy to find elsewhere.

The big books on Jackson are two three-volume biographies: James Parton's, issued in 1859 and 1860, and Robert Remini's, issued in 1977, 1981, and 1984. Parton seems to have had most of the important sources available to him, and he's a beautiful stylist. Here he is setting the scene of New Orleans: "The Mississippi is apparently the most irresolute of rivers; the bed upon which it lies cannot long hold it in its soft embrace." And here he is on the impossibility of recovering the truth about Jackson's duel with legislator Thomas Hart Benton:

Neither the eyes nor the memory of one of these fiery spirits can be trusted. Long ago, in the early days of these inquiries, I ceased to believe any thing they may have uttered, when their pride or their passions were interested; unless their story was supported by other evidence or by strong probability. It is the nature of such men to forget what they wish had never occurred; to remember vividly the occurrences which flatter their ruling passion; and unconsciously to magnify their own part in the events of the past.

All three volumes of Parton's biography of Jackson are in Google Books: volume 1, volume 2, and volume 3. (The image above is the frontispiece to volume 2.) Though Parton sees Jackson's merits, he is not a fan, as Remini sometimes is. Remini is a researcher of great energy and diligence, and I would guess that he's the only person who has discovered more about Jackson than Parton did. I found myself disagreeing with some of his analyses, however. For example, Remini argues that Jackson's New Orleans victory did affect the territorial outcome of the War of 1812, despite the prior signing of the Treaty of Ghent. That seems unlikely to me, on the face of it; moreover, in 1979, in the journal Diplomatic History, the scholar James A. Carr turned to British military correspondence and internal diplomatic memoranda to show that by the end of the War of 1812, the British wanted nothing more than to wash their hands of America and conflict with Americans.

The article by Abraham D. Sofaer that I refer to at the end of the article is "Emergency Power and the Hero of New Orleans," Cardozo Law Review 2 (1980): 233 ff. Also useful, as I was thinking through the legal issues, was Ingrid Brunk Wuerth's "The President's Right to Detain 'Enemy Combatants': Modern Lessons from Mr. Madison's Forgotten War," Northwestern University Law Review 98 (2004):1567 ff. Unfortunately, neither of these is available online for free, though they're easy to find in for-profit databases. In fact, I turned up remarkably few Internet-enhanced multimedia supplemental whirligigs during my tours of Web procrastination this time out, but no Andrew Jackson blog post would be complete without a reference to the large White House cheese, and someone has digitized all of Benson J. Lossing's Pictorial Field Book of the War of 1812, which has some of the best battle diagrams going, if you plan to read a blow-by-blow account and want some visual guidance. Of course, the Hamdan v. Rumsfeld decision is online, as is the Military Commissions Act of 2006, and they may be profitably read side by side.

One thought on “Notebook: Jackson and habeas corpus”