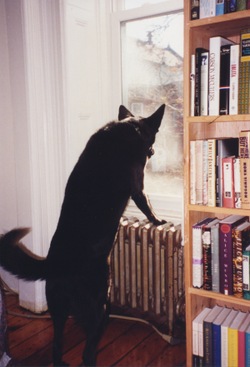 How do you describe a dog? Appearance doesn’t seem as characteristic as behavior. The gesture she won me with, when I first met her at an animal shelter in East Harlem eleven years ago, was a way she had of putting her head down and then leaning the back of her neck against your leg, and then holding it there while you scratched her. It seemed to mean, simply, “I like you,” and “I’d like you to pay attention to me.” When I was sitting on the floor putting my boots on, in preparation for a walk, she would lean this way against my shoulder, in what seemed to be quiet and grateful anticipation of the walk, and sometimes I would put an arm around her neck and scratch the top of her head and talk to her for as long as a minute before getting up, neither of us in any impatience to proceed.

When she wanted to play, or when she needed to demand a walk, she had a way of capering up to you, coming to a stop, fixing a look on you, stamping her right front paw, and giving a low huff out of the sides of her mouth. It was so unmistakable that Peter and I used to imitate her, when we wanted to make fun of the idea of an impudent demand. In napping, she sometimes left the tip of her tongue hanging out of the front of her mouth, with her teeth closed around it, like the stub of a receipt still lodged in a cash register. This didn’t mean anything at all, as a signal from her, but we thought it was very funny nonetheless. If you touched it, you found that her tongue would have dried so that it felt like paper, and she would pull it unconsciously back into her mouth. 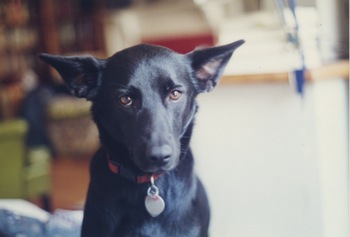 She had several barks, very distinct in meaning to me. I could tell her mood from them exactly, and I felt like Dr. Doolittle when trying to convince a startled neighbor that she was saying how glad she was to see him and that he needn’t feel alarmed. There was a short, sharp angry bark, repeated vigorously and connected by growling, which she used when an uninvited stranger had approached an apartment or house that she considered hers to protect. That was the only bark that anyone needed to be afraid of; there wasn’t often occasion for it in New York, but there were a few times when I appreciated it. Though she never bit a human being, she was large and black and had great teeth, and children spontaneously called her “Wolf” when we passed them in the street, and I felt very safe in her company. Next there was a high, brittle, repeated bark that meant mere excitement. There was no undercolor of fear in it. It came when the doorbell rang, or when, upstate, she saw a squirrel outside the window and therefore beyond her reach. She had a whine, too, when she wanted very badly to please. A few times, when I had been away for a while and was returning to her, she greeted me with this whine, but for the most part, it was reserved for unfixed male dogs that she pined for and for a pretty blond woman who had become her great friend early in life. 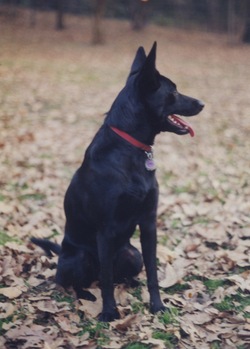 Her play bark, which was a kind of extension of the huff she gave when stamping her paw, was used with us and with other dogs. It had more color than other barks and was more variable in frequency, and it shaded, if she was enjoying herself, into her best bark, which I would have to call her bark of attachment, because that’s all it seemed to mean. It was a kind of warbling, crowing bark, and she gave it only when she was very happy and only with people she had met often before and knew well (such as us, but not only us). It had so much color it almost sounded human; she would kind of chew the sounds as she was giving them, in a cartoony, funny-old-man sort of way, and they wandered up and down and up again in pitch, usually ending up, in a trilling roo-roo-roo-roo. I tried once to record some of her barks, in hopes of being able to illustrate how different they all were, and I discovered, unfortunately, that run-of-the-mill tape recorders aren’t well designed to capture the volumes and frequencies of dog speech. I did discover something remarkable, however, in the attempt. I discovered that she was talking to me all the time. It was a good day, and she crowed when I told her we were going for a walk, and then gargled and yodeled a little in anticipation. But what I hadn’t been able to hear in life, but which the tape recorder picked up, was that as we walked downstairs and outside and down the sidewalk, and I occasionally spoke to her, in the inane, encouraging way that dog owners do, every speech of mine, every single one, she answered with a little chuff, which I hadn’t heard consciously at the time but which was distinct on tape, so that what had seemed to me to be monologue was in fact dialogue, and the two of us were all the time pacing each other and measuring our happiness against each other through the sounds that we were making. 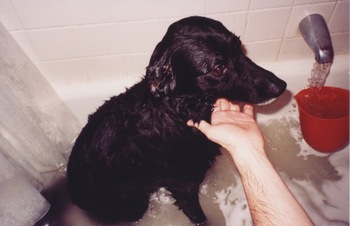 I tried to make it a point, first thing upon rising every morning, to rub her belly, and so when she saw me get out of bed she would put her head down and thump her tail and turn up her belly with an awful trustingness. But she was in fact very particular about how she was touched. She didn’t like anyone to touch her paws or her tail, or to rub her fur the wrong way. Nor did she like to sleep next to anyone. If she was in our bed and we got into it, she would almost invariably get out at once, with a sort of aggrieved and indignant manner. Sometimes you could coax her into staying a minute, if you rubbed her belly or scratched her neck or chucked her under the chin, but never for very long. If she slept next to me on the couch while I was working, it was on condition that I not try to pet her. She had great dignity that way. What she did like was having the side of her neck scratched. She would lean toward the side that you were scratching, pointing her snout farther and farther upward as she enjoyed it, until her nose was pointed straight up at the ceiling, and the sides of her muzzle were hanging loose and one ear drooped while the other perked. Her ears were quite marvelous, because they could swivel at independent angles to locate a sound, or lie flat against the back of her head to express a wish to please, or jump to attention at the sound of her name or a visitor.

We had a few games. One was, when we were returning from the park, that she would pick up a stick, preferably a very long one, and hit the back of my calves with it. I was to pretend to try to wrest it away from her and to “fail” to. Then she would drop the stick and wait beside it, and I was to pick it up and either throw it a little way ahead of us or dangle it in front of her to wrest away from me. Once I had dropped the stick, she would pick it up again, and so on back and forth between us indefinitely, until in the end she dropped the stick and I did not pick it up but said we had to go home, that the game was over. 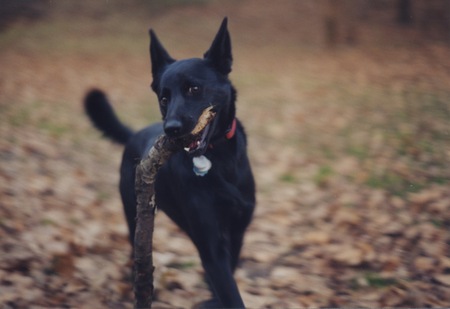 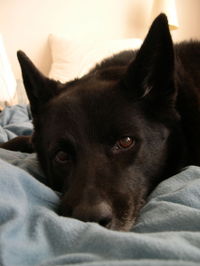 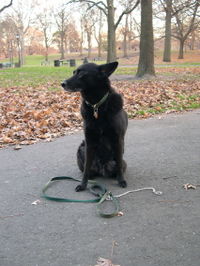 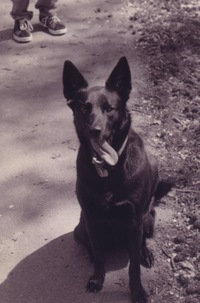 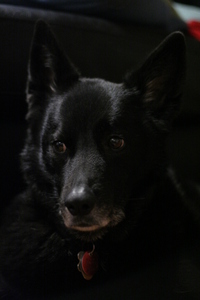