In a "Diary" about a recent visit to Grozny, Chechnya, published in the 22 March 2007 issue of the London Review of Books, Tony Wood writes:

It is hard to tell exactly where Grozny begins: it still consists for the most part of rubble-strewn patches of ground. Low, single-storey houses lie in ruins, entangled in dry, dead bushes; apartment blocks stand ragged, some blown open by shells, others peppered with bullet holes, yet others consisting now of nothing more than fragments of concrete — one or two bones from a skeleton. For a few miles there is nothing but ruins and rubble, half-homes that would seem to be uninhabitable. But then you see washing hanging from balconies, lights in a window here or there. There have been many images of Grozny after the Russian bombardments of 1994-95 and 1999-2000, and the memory of them goes part of the way towards preparing you for the devastation. The biggest shock is not the scale of destruction but the idea that anyone at all can live in this desert; that anyone could have returned to it and wanted to start again.

Wood’s description was so grim that I found myself wondering, as I read it, whether the devastation was visible from space — by the satellites and low-flying planes that feed data to Google Maps, to be specific. I put the article aside a few weeks ago, meaning to check, but forgot to, in part, I think, because I feared that Wood must have been exaggerating. Could the destruction really have been of such a magnitude, and the evidence of it still so abundant half a dozen years after the last major bombardment? And then there was the possibility that Wood was telling the truth, but that the wreckage wouldn’t be identifiable from a pure vertical angle. Maybe, if you were looking straight down, a bombed building would look very much like an intact building. Or maybe it would look like an empty field, and be invisible for the opposite reason. 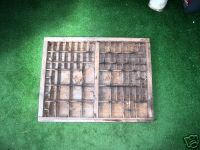 As it turns out, I needn’t have worried. The maps at Google fully support Wood, and it’s very easy to identify a bombed building: the walls are often still standing, at least in part, but the roofs never are. So, when you look from above, instead of seeing the single homogeneous rectangle of a roof, you see all the elaboration of the building’s floor plan — the interstitial division of the building into individual rooms. They look uncannily like printer’s trays, the wooden boxes that typesetters once used to store their type, one compartment per letter.

Sometimes you can see more evidence of the building’s state in the shadow it casts. The sun seems to fall through this building as through a skeleton:

Sometimes all the buildings in an area are skeletons, but sometimes the skeletons are standing beside intact buildings on the same block, confirming Wood’s observation that some residents of Grozny are living next-door to rubble: