Two new reviews of Peter's Heavy Rotation appeared today. "Describing music is one of the most difficult tasks a writer can undertake," Katie Henderson writes, over at Bookslut. "But describing the impact of that music—this is where the potential for magic lies."

And since for some reason I haven't already posted it, here at last is the video of the July 1 reading in Bryant Park, which features at 8:05 the band Fayaway, with special guest James Wood on the bongos, performing the Roches' "Hammond Song."

This weekend, my boyfriend's music-memoir anthology Heavy Rotation was reviewed by the Los Angeles Times, which calls it "a collection of informed essays that offer personal insight and literary merit."

Meanwhile, over at the website for Powells bookstore, Peter is blogging all week, and has already written about trying as a child to return albums whose sexuality embarrassed him and about the clash between his curating and his collecting impulses.

Update, July 28: At More Intelligent Life, a blog associated with the magazine The Economist, Corbin Hiar writes that "Like a discerning vinyl collector in a cluttered record shop, Peter Terzian has assembled an impressive and eclectic group of essayists to reflect on “the albums that changed their lives” in his new book Heavy Rotation."

Further update, July 31: The Second Pass features Heavy Rotation on its blog, noting that the women in the anthology tend to relate music to "external experiences," while the men focus on "what the music says about them."

Still more, August 3: Mark Medley of Canada's National Post interviews Peter in-depth about the inspiration for and assembling of Heavy Rotation, the future of the album, and what he's listening to now.

Shortly after 1:20pm EDT today (Monday), editor Peter Terzian and contributors Joshua Ferris and Martha Southgate will be talking about Heavy Rotation on WNYC's Leonard Lopate show, airing in New York City on 93.9 FM and AM 820 and streamable anywhere from the show's webpage. (Free download through I-Tunes available here, at least for a while.)

In other Heavy Rotation news, Liz Brown has blogged about the book at Kill Fee, and Peter has written a guest post at Large-hearted Boy about the role music has played in helping him mourn the loss of his mother.

Update, July 13: Newsday published a full-page preview of the book on July 11, and Publishers Weekly gave the book a starred review (scroll down) on July 6, writing that "these essays exhibit a perfect blend of respect and irreverence, with
an intoxicating intimacy; readers who love music will devour this
collection, and beg for a second volume."

Some photos from New York's Bryant Park today, featuring John Jeremiah Sullivan on the guitar, Nick Laudadio on the drums, James Wood on the bongos, and readings by Peter Terzian, Asali Solomon, Cliff Chase, Stacey D'Erasmo, and Joshua Ferris—all in honor of the release of the music-memoir anthology Heavy Rotation. 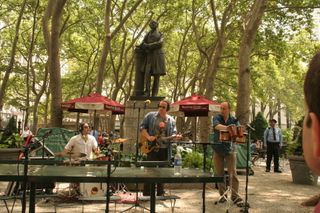 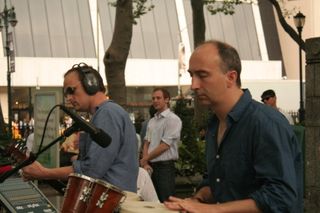 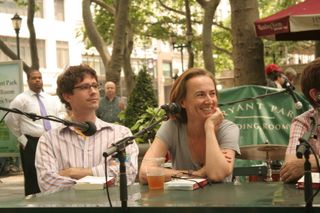 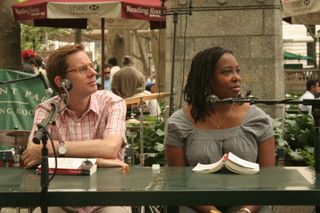 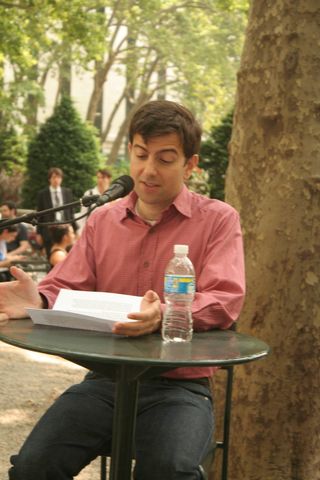