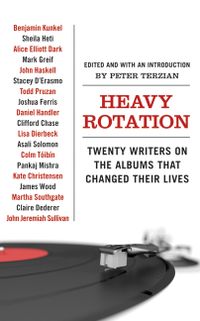 My boyfriend, Peter Terzian, has edited an anthology that Harper Perennial is going to publish on June 23: Heavy Rotation: Twenty Writers on the Albums that Changed Their Lives. It features the following pair-ups:

and quite a few more. In my opinion, it is the book of the year. Kirkus, perhaps a more neutral judge, calls it "Music writing with a personal twist by an assortment of modern writers. . . . A satisfying, fun read that may prompt rifling through old CDs and LPs to reclaim one's own transformative musical memories." You can order your copy now on Amazon, on Barnes & Noble, or through Powells.

And if you're in New York City this summer, you're invited to some parties in its honor, which promise to be pretty amazing, especially if you have a taste for lounge-singing book editors and bongo-drumming literary critics. Here's the schedule, courtesy of Peter:

No RSVP required. See you there!