There’s a consensus that sometime this century, the flow of oil out of the ground will peak. Some think it has already peaked; others that the peak is yet to come. What will happen when supplies of oil start to dwindle? People have started to wonder, including a writer named James Howard Kunstler in a book titled The Long Emergency. I haven’t read it, but his prognosis appears to be dire and includes something called a “die-off,” which doesn’t sound pleasant. Yesterday, in a bid for reassurance, I read a dismissive review of Kunstler’s book that I found through Arts and Letters Daily. I wasn’t reassured, however. The reviewer claimed that Kunstler’s “concern with oil depletion is overblown” because

the International Energy Agency’s (IEA’s) recent assessment in the World Energy Outlook 2005 finds that the world has sufficient oil to carry on at its present rate of growth at least out until 2030 (although the agency believes that this would be unsustainable on other environmental grounds).

I don’t feel altogether certain that I’ll be dead by 2030, so this wasn’t quite the warm blanket of denial that I was craving. Also, I wasn’t confident that the reviewer understood thermodynamics any better than I did, which is not very well, especially when he insisted that “total entropy on the Earth is not increasing . . . [b]ecause excess entropy is carried off by radiation into outer space.” Outer space? What about the greenhouse effect—does it trap entropy as well as heat? Don’t systems gain in entropy as heat is added to them, and isn’t that the net effect of the greenhouse gases, in preventing the release from Earth of heat?

Best to march quickly past the real physics, and get to the heart of the matter: dollars per gallon. Naturally, as my anxious mind contemplated the fate of a world in which fuel increased indefinitely in price, I wondered: How expensive would gas have to be for people to decide they’d rather take a horse-and-buggy than an automobile?

At first I thought that I would do this by adding up all the costs associated with keeping a horse—hay, blacksmithing, saddles, stableboys, much higher frequency of street cleaning—and compare them to those of keeping a car. In the former Soviet Union, there used to be whole academic departments devoted to making an inventory of all the society-wide costs and benefits of an item, in order to set, by fiat, its price. We are all Hayekians now, though, and believe that the best way to process all the raw data of abundance, scarcity, damage, benefit, consumer whim, and real convenience is by seeing what people actually pay.

As it happens, in New York today, it is possible to hire for a brief trip either a horse and buggy or an automobile. They aren’t exactly comparable; the buggy is a luxury item, and I suspect that it dawdles to seem more leisurely. Nonetheless both the buggy-owners and the cabbies must take the measure of a much wider range of expenses than I ever could, even with the assistance of the internet. I thought I’d start with their numbers, making a few adjustments along the way.

If you want to take a horse and buggy ride in Central Park today, it costs $34, and in twenty minutes you go one mile. Three miles an hour seems awfully slow—improbably slow. The websites of various companies that cart brides and grooms to and from church promise speeds no higher than four to seven miles per hour, and they seem to be offering their slowness as a selling point. In today’s world, the hirer of a buggy is probably paying mostly for the twenty minutes—for a share of the horse and buggy’s day—rather than the one mile. In a post-gasoline world, buggies would presumably go as fast as was financially and legally prudent. I’m guessing that I can safely double the speed advertised and say that a horse and buggy in Central Park could go six miles an hour without increasing its underlying costs. So I’m jiggering with the data, and guessing that for the same $34, you could get a horse and buggy to go two miles in twenty minutes.

To go two miles in Manhattan by taxi costs you $2.50 plus 40 cents for every one-fifth of a mile—in total, $6.50. (For ease of math, I’m leaving tips out of both sides of the equation.) Let’s estimate that cabbies get about 24 miles per gallon, and that they go about 20 miles an hour in the city. That means the trip consumes about one-twelfth of a gallon of gasoline and takes about six minutes.

There’s one more arbitrary number to come up with. How valuable are the fourteen minutes you’d lose by taking the buggy? That’s hard to figure; it probably depends on how valuable your time is. People with a low hourly wage will probably walk rather than hire either vehicle, so let’s say $20/hour. The value of those 14 minutes will therefore be 14 min./60 min. times $20/hour, or $4.66.

Let x equal an increase in price per gallon of gasoline. Then as gas becomes more expensive, the price of the automobile taxi will be $6.50 + 0.0833 x. The price of the buggy will be $34 plus the loss of time, valued at $4.66. A person would just as soon hire a hire a cab powered by a horse as one powered by an internal combustion engine when the total prices are equal, i.e.,

When gas costs $385.93 more per gallon than it does today, then, you’ll probably start taking the curricle. 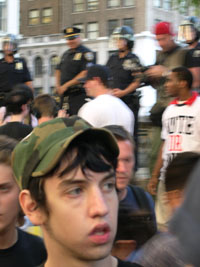 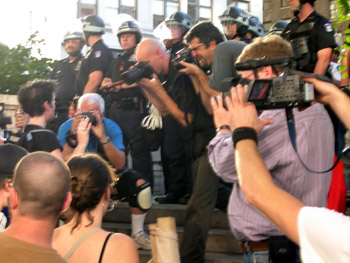 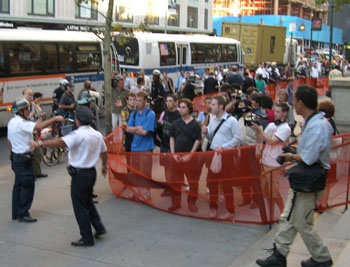