All’s fair in love and war, and in Anne Brontë’s The Tenant of Wildfell Hall, one of the weapons is literature. After Helen Lawrence marries for what she thinks is love, she learns, to her chagrin, that her husband, Arthur Huntingdon, has bad habits—drinking, gambling, and womanizing—and finds life insufferably dull without them. Will he desert her for the big bad city of London, or will he learn to be contented with a quiet life at home? Briefly he tries to amuse himself by telling stories of his old love affairs, but Helen reproves and silences him. Their domesticity would be bliss if only he could content himself with her sort of fun: the reading of nice books.

He’s unable to. “He never reads anything but newspapers and sporting magazines,” Helen reports. “When he sees me occupied with a book, he won’t let me rest till I close it.”

But because this is a Brontë novel, and not a Sunday school treatise, books aren’t entirely benign. During the couple’s first quarrel—in recollecting a married woman who once romanced him, Arthur is insufficiently moralistic, and Helen becomes upset—Helen gives him the silent treatment, and literature becomes a tool that enhances her power not to pay attention to him.

This is a neat reversal of the conventional slur on novels in the period, which was that they vitiated women’s minds by filling them with fantasies and distracting them from duty. Arthur is revealed to be weak precisely because he can’t or won’t read novels. “From dinner till bed time, I read,” Helen reports, of the progress of their combat. “Meanwhile, poor Arthur was sadly at a loss for something to amuse him or to occupy his time.” Because it’s rainy, he can’t take his horse out for a ride, and he is reduced to fidgeting indoors—”watching the clouds, cursing the rain, alternately petting, and teazing, and abusing his dogs, sometimes lounging on the sofa with a book that he could not force himself to read, and very often fixedly gazing at me, when he thought I did not perceive it.” Helen, on the other hand, “managed to preserve an undisturbed, though grave serenity throughout the day.” #Winning.

After dinner, Arthur drinks “an unusual quantity of wine,” and the weaponizing of books becomes explicit:

I returned to my reading; and he endeavoured to occupy himself in the same manner; but, in a little while, after several portentous yawns, he pronounced his book to be “cursed trash,” and threw it on to the table. Then followed eight or ten minutes of silence, during the greater part of which, I believe, he was staring at me. At last his patience was tired out.

“What is that book, Helen?” he exclaimed. I told him.

At this point Helen discovers that literature offers a further tactical advantage over one’s spouse:

I went on reading—or pretending to read, at least—I cannot say there was much communciation between my eyes and my brain; for, while the former ran over the pages, the latter was earnestly wondering when Arthur would speak next, and what he would say, and what I should answer.

Even when you’re losing, a book can make you look like you still have the upper hand.

Over at Slate, I have an essay about the existential pleasures of filing taxes as a gay married couple.

Peter has written a culture diary for the Paris Review blog. The first installment ran yesterday; part two is imminent.

In other news, an MP3 of “Melville’s Secrets,” the lecture I gave last week about Moby-Dick, sperm, and industrial capitalism, is now downloadable from SUNY Geneseo’s website. 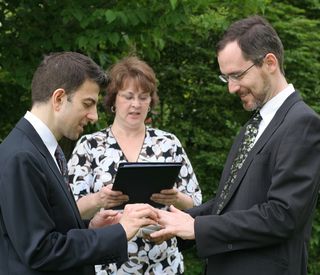 Blog reader, I married him.

When you and I read Kierkegaard’s Either/Or this spring, in a group that met every morning for a week in the second-floor cafeteria of the Houston Street Whole Foods, we had many arguments about the nature of marriage. Now I seem to be joining you in another, though our private conversation has become, in something like the ambiguous transformation wrought by marriage itself, public. Either/Or, as you know, is divided into two parts, the first written by a Seducer, who approaches the problem of human relations aesthetically, and the second by a Judge, who approaches it ethically. Neither approach proves satisfactory; a better title for the book would be “Neither/Nor.” To the surprise of those of us who know you personally, your essay “On Repressive Sentimentalism” has caused some in the blogosphere to mistake you for a figure like Kierkegaard’s Seducer. In disagreeing with you, I suppose I run the parallel risk of sounding like the Judge, who is, I believe, in somewhat greater danger of losing his soul, because in order to preserve decorum, he seems willing to smother the spark that makes human relations possible at all. Keeping the danger in mind, I will risk answering you.

I dissent from many of the claims in your essay, but I feel my resistance most strongly to the following sentence:

Opposing gay marriage is like denying the wishes of people who want to feed your pets or take out your garbage.

If you believe that gays who marry resemble people offering to take out the trash, then you believe that gays who marry are offering a service. I presume you mean that they are surrendering their sexual wildness for the sake of social approbation and in the process are making a gift of sexual orderliness to the common weal. If that is all marriage is—a bargain wherein autonomy is traded for status—then it is indeed a ridiculous bargain for any sexually potent adult to make. (Lurking behind the cartoon figure of the promiscuous gay man, whom your essay eulogizes, is his inevitable twin, the gay eunuch.) But surely it’s possible to imagine marriage as something else, something that our Kierkegaard reading group tried to investigate, as did the reading group that followed it, which tackled Stanley Cavell’s Pursuits of Happiness. Would it be mere rhetoric to suggest that marriage is in fact itself a form of wildness?

Your claim in the sentence quoted above, which is a sort of a joke, has two lemmas. First, you imply that marriage is a surrender of sexual liberty. I don’t think that’s accurate. Marriage is Cary Grant and Rosalind Russell standing side by side in the closing scene of His Girl Friday, nattering on with the same jollity when handcuffed to each other as when not handcuffed. Marriage is indifference to handcuffs. There are always opportunities to escape. The strange discovery that makes marriage possible is that one has the liberty not to—the liberty to make the same choice, day after day—and that one happens to want to make a consistent choice. It is a paradox, at least. Will one happen to want to make the same choice forever? Maybe not. Separation and divorce are always possible, in our world, and maybe they give marriage its poignancy. The possibility of separation proves that no two people stay chained to each other unless they want to. It even seems to be the case that people who want to stay chained to each other sometimes can’t manage to. It is at any rate an error to think that marriage is a surrender of liberty. It is an exercise of it.

The second lemma of your joke is less seemly. It is mockery of anyone—in this case, gays—who wants the general social approbation implied by marriage. I suspect that you yourself will find this indigestible if you stop and think about it. Do you really intend to mock homosexuals, who have long been considered and in some circles still are considered pariahs, for wishing to have proof that they are no longer so thought of, at least as a matter of law? Your joke will only seem funny to readers who have taken social approbation for granted for so long that they now see only its conformist aspect and no longer its psychological and social benefits. Yes, yes, society bestows its approval conservatively; do you really think that people who have gone without it for most of their adult lives are unaware of that? You are somewhat in the position, here, of a millionaire who styles himself a radical and makes fun of the lengths that other people will go to in order to become rich. The radical thing would be to share the wealth, or to campaign for a more equitable economic system.

I’m not denying, by the way, that people in a marriage customarily agree to forgo sexual opportunities outside it. I’m saying merely that they agree to because they realize that they want to forgo them. Such a realization cannot happen to a Foucauldian motley of bodies and pleasures. Bodies have no free will; left to their own devices, they say yes to every pleasure they can obtain. Such a realization can only happen to a self, or to something you might even denominate a soul. Selves and souls, you might reply, are fictions, and I agree that they are not a given but are something people make in the course of living. I believe, nonetheless, that they are worth making. Keats called the world a “vale of soul-making,” and on that understanding, a refusal to make a soul is a denial of incarnation—a refusal of one of the world’s highest pleasures and deepest experiences. I am not of course saying that only married people have souls. I am saying that it’s worthwhile to have a soul, in part so as to have the capacity to make a choice like marriage, but mostly because it would be a shame to go through life without ever thinking about what Hopkins would call the sakes of it. This is diving rather deep in order to answer a relatively shallow question, I admit, but this way of arguing about marriage seems to require it.

I dissent from any deprecation of the self, and a fortiori of the soul, in the name of liberating the body. A liberated body is merely an animal, and there are stark limits to the liberty that an animal is capable of. Human liberty goes further—it involves something else—and to exclude that something else from a human life is sort of to miss the whole point, frankly.

What exactly that something else is, in a marriage or in a life, is hard to say without misrepresenting it. Emerson recommends modesty on the subject, and I wonder if your error has been to show such an excessive modesty that in your essay you pretend, as a conceit, that this something else does not even exist. But it does, I believe, even if it is invented.