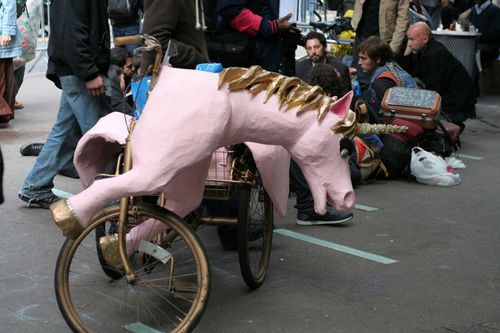 To spend one’s days and nights in a New York City park is expensive. At a minimum, one gives up running hot water, protection from rain and cold, convenient access to a bathroom, and most forms of privacy. I’ve done no more than visit the Occupy Wall Street protests in Zuccotti Park, whose older name of Liberty Plaza the protesters have reclaimed, and I imagine that the ones who actually spend the night there know who each other are. Maybe the willingness to lose safety and comfort are proof, in one another’s eyes, of a level of commitment. Maybe the loss underwrites a trust in one another that makes possible the group’s persistent faith in the ideals of openness and democracy.

During my two visits, I wasn’t wearing my reporter’s cap, and I’m not much of a joiner. That left me the role of tourist. When I visited on Thursday, September 29, haphazard eavesdropping seemed to pick up repeatedly the earnest, necessary, and tedious conversations typical of groups of people trying to decide how to make decisions—conversations that tend to become especially byzantine in groups suspicious of hierarchies. But the openheartedness with which people were giving themselves to these tedious conversations was winning, and the protesters’ physical innovations to group interaction were ingenious and looked fun. Since electric amplification is forbidden in the park, the protesters have adopted what they call “the people’s mike”: at the end of every phrase, a speaker pauses while audience members who were able to hear him repeat the phrase for the benefit of audience members who couldn’t. Lest this practice render listeners too fawningly imitative, audience members all the while talk back to the speaker through a variety of silent, waggling gestures: jazz hands pointing upward signify approval, a pinched forefinger and thumb suggest that the speaker cut his message short, and so on. Watching this new semiotics, I found myself wondering, Why haven’t people been doing this all along? It’s as if it took the Facebook generation to make the most of human presence. People of every description were photographing, filming, and recording. Policemen stood around the periphery, gazing into the crowds, apparently looking for alcohol, which the protesters have forsworn, and tents, which city law forbids. The multiplicity of surveillance triggered a little paranoia in me, and I wondered what sort of databases my visage might be appearing in.

When I visited again today, Tuesday, October 4, the food table looked better stocked, but the sleeping area looked more bedraggled. The photographers, meanwhile, seemed more benign; I watched a young man interview a protester on video, and when she asked, at the end, who he worked for, he explained that the video was just for his Facebook page; he added that he was from Tennessee. Whereas, on my earlier visit, strangers had greeted me and asked what I might be able to contribute, today the people who struck up conversations with me seemed to have more-focused agendas. A woman dressed as Marie Antoinette tried to sign me up for wind-powered electricity. A camera crew for Al Jazeera asked me to pretend to be reading an issue of the protesters’ newspaper, the Occupy Wall Street Journal, for the sake of some B-roll that they were shooting. I actually did want to read it, and the outreach table had given away all its copies, so I pretended. The camera guys were willing to let me keep the prop.

Is this the revolution? I haven’t gone to a march yet, and haven’t yet attended the protesters’ twice-daily town meeting, which they call General Assembly, so I’m hardly in a position to say. Some critics have pointed out that the finance companies once associated with Wall Street are now for the most part headquartered in midtown, but the criticism seems to miss the point: Wall Street, as a location, is a symbol. The location of Occupy Wall Street, on the other hand, is peculiarly literal. The protest is happening in a particular place; online, one may observe it happening, but one can’t virtually participate; it isn’t clear whether the improvised infrastructure could be transferred to another location, let alone seeded to many locations.

Other critics have objected that the protesters don’t seem to know what they want—an objection harder to dismiss. Indeed, the Adbusters poster that launched the movement asked the koan-like question, “What Is Our One Demand?” Similarly, the “Declaration of the Occupation,” which the New York General Assembly adopted unanimously on September 29, lists grievances but proposes no remedies—or rather, no specific remedies; it does exhort people to “create a process to address the problems we face, and generate solutions accessible to everyone.” But details matter in politics; it’s only through negotiation of details that compromises can be reached. Moods—even good moods—pass, and New York City is going to get colder before it gets warmer. Before winter comes, I hope the protesters find a way to disperse their movement without dissipating it.