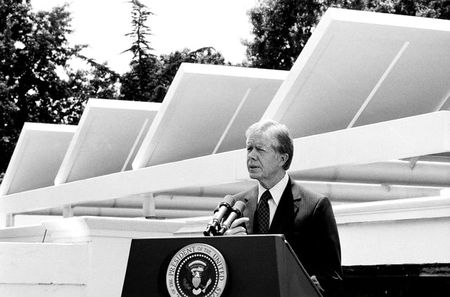 My essay-review “Good at Being Gods,” about Buckminster Fuller and the alternative energy movement of the 1970s, is published in the 18 December 2008 issue of the London Review of Books. It begins thus:

In the recent Pixar movie Wall-E there is a conflict between two different visions of technology. From one angle, technology appears to be humanity’s overlord: the movie imagines that in the future a megacorporation called Buy N Large will so exhaust and pollute the planet that it will have to whisk its customers away on a luxury outer-space cruise ship for their own protection. From another angle, technology appears to be the only thing capable of saving humanity’s soul. Wall-E, a scrappy, pint-sized robot left behind to tidy up Earth, scavenges for mementos of human culture, finds evidence of resurgent plant life and falls in love. The two visions are inconsistent but inextricable: Wall-E is himself a Buy N Large product.

A similar ambivalence colours the reputation of the 20th-century designer Buckminster Fuller. You might say that Fuller aspired to engineer a post-apocalypse outer-space cruise ship but in the end managed only to get himself adopted as technology’s mascot. . . .

The article is available online, but you have to subscribe or buy an electronic copy to read it. (I encourage you to, because ultimately that’s how I find the money to buy my daily allotment of toast and peanut butter.)

The file folder containing my notes for this review is titled “Utopian post-oil,” because when I started thinking about the issues, it seemed to me that a lot of the utopian alternative-energy notions of the 1970s were returning to haunt (or inspire) us today. The review focuses on K. Michael Hays and Dana Miller’s Buckminster Fuller: Starting with the Universe, because much of the 1970s movement crystallized around Fuller, and the Whitney Museum show and Yale University Press exhibition catalog provided an opportunity. But I also take account of Andrew G. Kirk’s Counterculture Green: The Whole Earth Catalog and American Environmentalism (University Press of Kansas, 2007), an informative book on an aspect of technological and social history that hasn’t been much chronicled; Ted Nordhaus and Michael Shellenberger’s Break Through: From the Death of Environmentalism to the Politics of Possibility (Houghton Mifflin, 2007), an analysis and manifesto that seems to have been taken to heart by the Obama campaign, if I’m reading the tea leaves correctly; and Giovanna Borasi and Mirko Zardini’s Sorry, Out of Gas: Architecture’s Response to the 1973 Oil Crisis (Canadian Centre for Architecture, 2007), a sort of visual encyclopedia of the 1970s alternative-energy movement and as a book an object of great charm. The “Sorry, Out of Gas” website is also well worth a visit. I also tapped the following for more information:

As close students of my work, if there are any, will have noticed, this is part of an ongoing obsession about the history of energy. Or anyway, a trilogy, comprised of my recent New York Times Book Review piece on horses as a nineteenth-century energy supply, this one for the LRB on windmills and solar power, and another forthcoming in the New Yorker.

Happily for those who disagree with my skepticism about do-it-yourself environmentalism, the website Treehugger recently released a buying guide to “Hot Home Wind Turbines You Can Actually Buy.” (Hot as in stylin’.) And for those in search of more Fulleriana, here are links to Stanford University’s R. Buckminster Fuller Archive, which features an entertaining slide show; a sort of interactive information tree of Fuller’s ideas called the Fuller Map; and for explications of the Fuller terminology that flummoxed me, the R. Buckminster Fuller FAQ.