The other night, a friend in publishing mentioned in conversation that December sales had been disappointing throughout the industry this past year. The 2006 holidays had brought an upward bump, as people bought books as gifts for family and friends, but the bump was smaller than expected.

His comment intrigued me, because I wondered if it might be another sign of the qualitative change in the culture caused by the decline in literary reading. Buying a book for oneself is a relatively straightforward thing to do; all that’s required is that you like to read, are in the mood to, and have enough money or credit to effect a purchase. But it’s a bit more complicated to buy a book as a gift. The person you’re buying for has to be a reader, and you have to be one, too, because you have to feel confident that you can choose a book worth reading. Moreover, you have to know enough about the recipient’s reading habits to choose one she would probably like but hasn’t read already. In other words, the two of you have to have been having a fairly sophisticated, ongoing conversation about what you read and what you like to read.

Thus the purchase of books as gifts is probably a more fragile statistic than the purchase of them for oneself, and if literary reading is on the decline, one would expect books to be bought less frequently as gifts. One might even expect that the proportion of books bought as gifts would decline more steeply than book-buying generally. And that does seem to be what’s happening, to judge by retail bookstore sales reported to the U.S. Census Bureau. 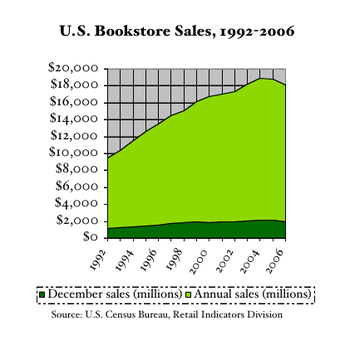 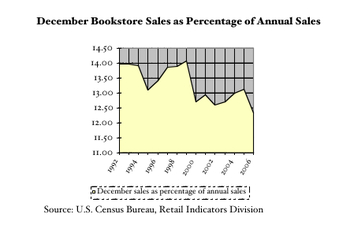 If you divide the December sales by the annual sales, you get the yearly percentage of book sales that occur during the holidays. As you can see, if December sales are a reasonable proxy for gift sales, then people have been buying fewer books as gifts, comparatively speaking, over the last decade and a half—another sign, I think, that the place of literary reading in American culture is shifting.

(A side note: Though I didn’t chart them, the largest spikes in book sales every year aren’t in December at all; they’re in August and January, as students buy books for courses. I haven’t checked yet to see whether these are becoming a higher proportion of reading expenditures, but if they are, that would be another dark sign, in my opinion…)

POSTSCRIPT (1 September 2007): I think this post is safely too outdated for anyone to be in danger of referring to it any more, but in case anyone does, there’s a major flaw in my data above. The Census department’s numbers only include brick-and-mortar book sales, not online book sales. Now, since Amazon automatically does packaging and mailing, it’s super convenient for book giving. It’s possible, therefore, that the decline in month-of-December sales noted above is *not* a decline in giving books as gifts, but rather a shift toward buying gift books online.

9 thoughts on “Would you like a gift receipt with that?”