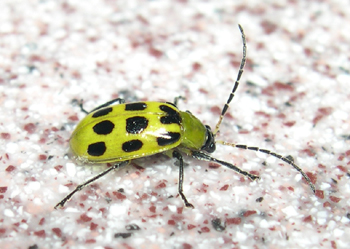 This appeared on our kitchen counter as I was cleaning up tonight. In real life it was much smaller, only about a third of the width of my thumbnail. It was somehow too interesting-looking for me to squash it, so I took a picture and contrived to sweep it out the window. Then I panicked and wondered whether I might have wrongfully spared the life of an Asian longhorned beetle. They’ve been spotted recently in Brooklyn (there’s a fantastically alarming Bug Wanted poster here). I don’t think it is, upon reflection–wrong color–but it doesn’t really look like any of its beetle rivals, either. But that’s probably because the people over at the forestry department are relying on the public’s ability to disciminate between a black beetle and a green one on their own.