I do not assert that every rock song must have all three elements. But I do assert that if it lacks one, the absence will be felt. By inspection, since rock songs contain both loss and fight, to the extent that they mourn, it is incomplete mourning. They are not reconciled. If the singer is sad because a lover has left, one must have at least the suspicion that the singer would sleep with him again anyway, if it could be arranged, loss of face be damned. Or would take another hit. Or play with your heart.

The sugar is vital. The problem with Britney Spears’s “Oops, I Did It Again,” insofar as there is any problem at all, is not the sugar. Rock can never be too saccharine. Is there anything sweeter than, say, the chorus of Bowie’s “Ashes to Ashes”?

Ashes to ashes, funk to funky
We know Major Tom’s a junky
Strung out on heaven’s high
Hitting an all-time low

The problem with “Oops” is that it is not clear that the loss is real, or that if it is real, that she feels it. In fact, we’re pretty sure she doesn’t. But the song works because we appreciate the loss even if she doesn’t. And you know, on second thought, perhaps she does.

Now, in composing a mix tape, the trick is to monitor the fluctuations of loss, fight, and sugar from song to song. At its best, one should proceed like an artful diabetic dosing himself with insulin, such that the variances are not too abrupt, but not wholly without interest, either. On a five-point scale, for example, one might rate the loss in Hem’s “When I Was Drinking” at 5, the fight at 2, and the sugar at 5. To abbreviate, its profile is 5-2-5. You want to follow it with a song that varies from all of these elements, but not suddenly. For example, you could move to a song with a profile of 4-3-4, such as Ben Kweller’s “Different But the Same,” still fairly wistful but with noticeably more pep. Stepping up a degree in two out of three categories, you might next choose a 5-4-4 song, such as “Lost in the Supermarket,” by the Clash. Melancholy critique of late capitalism, with an accelerating drumbeat: high loss, high fight. You’re nearly peaking, so you should next back down to the Lucksmiths’ “I Prefer the Twentieth Century,” which, because it mourns a century, a rather abstract loss but nonetheless an irrevocable one, clocks in at a milder 4-2-5.

If we graph these progressions, we arrive at the following: 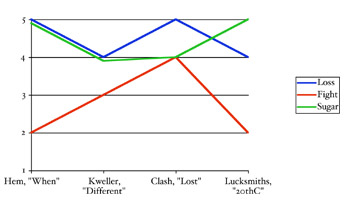 Fight is shown in red, loss in blue, and sugar in green. One might imagine constructing a mix in which the curve of fight mounted steadily, while that of loss oscillated on a sine curve and that of sugar trilled steadily in the upper registers of 4 and 5 consistently. Or a mix in which loss had a sudden onset but tapered off, while fight rose and subsided, and at last only sugar remained.

I trust that I have given a sufficient sketch here of the science behind playlists. The boyfriend asks, “Does it work, though?” Sheesh. For the record, I don’t personally believe anything I’ve written here, except the first line. And also for the record, the complete playlist under discussion is as follows: