“Semantic Time Travel,” my essay about the Historical Thesaurus of the Oxford English Dictionary, appears in the 10 January 2010 issue of the New York Times Magazine. 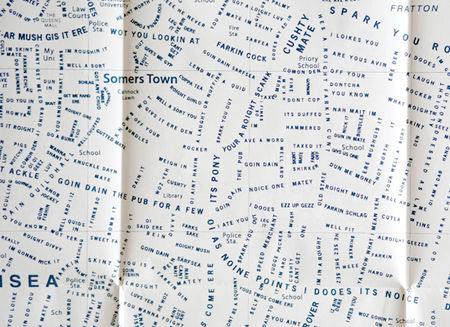 "Pixies, Sheilas, Dirtbags, and Cougar Bait," an essay of mine on slang, appears in The Nation of 29 December 2008. Revealed: a glimpse into the interior world of a "literary" gay couple in Brooklyn, and the sordid truth about the low intellectual level of their home banter. Including: lots of words so dirty you may not know what they mean. Plus: the return of Gordon Bennett.

[Image above: Jodie Silsby's Portsmouth Vernacular, the dialect of Portsmouth, England, printed as a street map. Buy a copy here. Via Jacket Mechanical, who got it via Creative Review.]

Two years ago, I suggested that the first use of the phrase “mad—mad I tell you” was in 1879 but invited reply from discoverers of earlier usage. The brilliant and ever-resourceful Paul Collins has risen to the challenge, and has discovered the phrase in an 1855 novel, The Old Farm House by Caroline Hyde Butler Laing.

Did Walt Whitman attend Reverend William Patton’s 9 March 1852 lecture on loafers at the Broadway Tabernacle in New York? The somewhat derogatory term had been in circulation for at least a decade, and Whitman, not yet the poet of Leaves of Grass, had already used it in his journalism. But Patton put a torque on the word that would probably have stuck in Whitman’s mind, if he had been in attendance.

Patton gave a conventional etymology and definition. The word loafer “was supposed to be derived from the German laufen (to run). . . . A feature of the loafer’s character is unwillingness to work; he loves idleness.” But when Patton elaborated his idea of the loafer, he prefigured some of Whitman’s imagery. The loafer, he said,

would wonderfully enjoy Eden, where fruits grew without cultivation, and he would have nothing to do but enjoy himself. The probability is, if he could have directed his own creation, he would have had himself made a vegetable, not an animal, and that he should be planted in a deep soil.

In his 1855 poem, Whitman would write

I loafe and invite my soul,
I lean and loafe at my ease . . . . observing a spear of summer grass.

The poem’s narrator goes on to consider the spiritual meanings of grass, again and again, until at last he seems to become one with it:

I bequeath myself to the dirt to grow from the grass I love,
If you want me again look for me under your bootsoles.

Patton told his audience that the loafer was “a poetical, transcendental philosopher, believing in the beauty of life per se.” Such a belief was expected to sound ridiculous; at lecture’s end, Patton reminded his listeners that idleness was the devil’s plaything and exhorted them to “Be a street sweeper, be a scavenger, if need be, but do not be a loafer.” But a poet might have listened with a contrary and selective ear, and taken the mockery as a compliment.

According to Patton’s complaint, the loafer is everywhere, because he “adapts himself to the most contradictory circumstances of wealth and poverty, ignorance and education.” In Whitman’s hands, of course, the range of identities available to the loafer-poet would become a boast:

In all people I see myself, none more and not one a barleycorn less,
And the good or bad I say of myself I say of them.