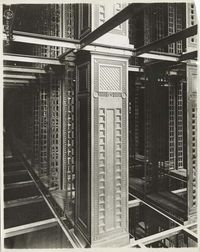 Last week, when I wrote about the New York Public Library’s plans to remove the stacks and most of the books from its research collection on 42nd Street, I contrasted the different ways that writers and readers use a library. I was trying to convey the different missions of a research library, which allows access to deep, little-visited stores of knowledge, and a circulating library, which makes culture available to the public for free. A few people wrote to tell me that it’s not only writers who rely on the New York Public Library’s research collections. You’re right! My distinction between writers and readers was only a metaphoric way of speaking, and it was imperfect. Creative people in other arts also need access to the cultural tradition, and mere curiosity leads many people to investigate who have no intention of addressing the public. It’s also the case that the New York Public Library, located in a transit hub, serves academic researchers throughout the Northeast who teach at colleges that have only modest research collections on their own campuses.

On the other hand, during a cordial, on-the-record telephone conversation on Monday, Ann Thornton, the Andrew W. Mellon Director of the New York Public Libraries, told me that the library hopes that it will be able to store more than 1.5 million books onsite after the CLP. She said that the library isn’t altogether certain of the capacity available in the Bryant Park Extension, the shelving that’s underneath Bryant Park. They hope that there will turn out to be room for more than 1.5 million research-collection books; administrators are also trying to find storage space for them elsewhere within the 42nd Street building as well. Ann didn’t, however, provide a new number.

There are a few other pieces of news and fact-checking to report from that conversation. When I asked whether any steps had yet been taken to implement the CLP, Ann said that the library was “in schematic design”—in other words, Norman Foster’s architectural firm is now drawing up blueprints—but that no demolition or construction had yet taken place. Books, however, have already begun to leave the building. As they’re bar-coded for the move, some books are being sent to a temporary offsite storage facility run by Clancy-Cullen. The books aren’t going to Recap, the library’s offsite storage facility in Princeton, New Jersey, because the library has filled its allotment of shelves there and needs to build more space. While the NYPL’s books are at Clancy, they can still be paged by readers and retrieved for use at the 42nd Street library.

A number of colleagues have told me they find appealing the proposal in the CLP to provide 400 to 500 desks for writers at 42nd Street. I asked whether there was a firm commitment on the library’s part for these desks, and Ann said it was just a proposal, though something the administration did hope to do.

On the webpage where the library discusses the CLP, the library has said that only 300,000 out of 5 million ink-on-paper volumes were used at 42nd Street last year. I asked about the data behind that statistic, because the research library switched to an electronic-based circulation system only in the last few years. Ann said that the statistic was based on data from the new electronic circulation system and on analysis of call slips that don’t go through the electronic system. Is there comparable data for earlier years? Not quite, given the recency of the electronic system, but Ann said that the library had done what she called “snapshot analysis” in earlier years, based on the analysis of ink-on-paper call slips collected over a certain interval of time. She said they began performing these “snapshot analyses” before the offsite storage program was inaugurated in 2000, and that they’ve performed several in the years since. The library’s data indicate that use of the research collection has been declining, though not as fast as the decline at other institutions that belong to the Association of Research Libraries. (She thinks the NYPL is doing better than average because of recent efforts to make its manuscript and archival collections easier to find.) One of my worries here is that comparisons across time may not be statistically significant if the means of data collection has changed so markedly. From paper call slips and pneumatic tubes, it’s a big jump to bar codes and computers.

Ann mentioned that the library had stopped collecting in science at a research level before 2008, deciding to focus on its strengths in the humanities, but she assured me that it is still collecting in Slavic, though Czech literature isn’t considered a particular strength. She said that the library looked forward to hiring more curators, with special expertise in Latin America and other areas. We also talked extensively about Marli, the program that allows users to check books out of the research collection for the first time, and I hope to write more about this complex topic later.

Our conversation didn’t give me the sense that the library’s administrators are yet reconsidering their plan to remove the 42nd Street building’s bookshelves of Carnegie steel—which, by the way, are featured in beautiful archival photos that illustrate a 2010 essay on the library’s own website.

One thought on “The NYPL’s Central Library Plan: Updates and Corrections”