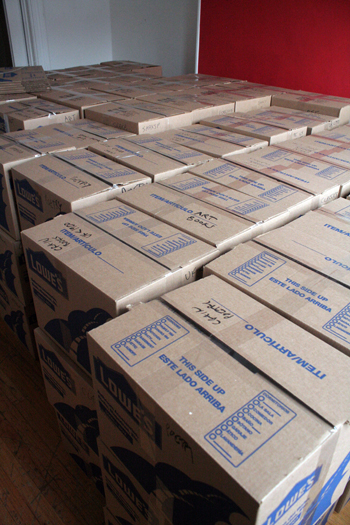 Peter and I have moved! My Earthlink email address is kaput, though my Harvard forwarding email address (the one on my About page) remains intact. Here it is again, should anyone need it:

If anyone has a wish to snail-mail me something, please get in touch by email and I’ll let you know the new address.

Apologies for the blog silence. I have discovered that the reason that there are so many essays about unpacking one’s library and so few about packing it is that the latter process more or less does to you what Dave does to HAL at the end of 2001: A Space Odyssey, and it begins to seem prudent, with such a diminished capacity, to remain silent. Today, on day five of a flu of some kind, I seem to have lost my corporeal voice as well, so the silence apparently is to continue. We love our new apartment, thanks for asking, except for the bathtub drain that had to be unclogged by professional “snake,” the two successive leaks under the kitchen sink, the busted lock on the front door, and the fiendishly permanent child guards on the windows, which required five trips to the hardware store in order to collect all the equipment necessary for their uninstallation. (Babies apparently wish to hurl themselves out of apartment windows with all the ingenuity and resourcefulness of inmates at a Supermax prison, and must be correspondingly restrained.) Air conditioner brackets were my Waterloo.

The last count that I made of our book boxes before moving was 146, and we packed for another full day after that, so I think we ended up moving about 200 boxes of books. (We were able to stack them in an empty apartment on the floor below us, thus the weird orderly accumulation of volume in the photo above.) Furious and hasty has been the deaccessioning, but we still haven’t found enough bookshelf space in the new apartment to fit what remains. Some day soon I plan to return to being a writer, instead of just a subpar handyman and occasional haunter of Twitter, but that day is not yet, alas. There are no plans to acquire an e-reading device. Where would it go?