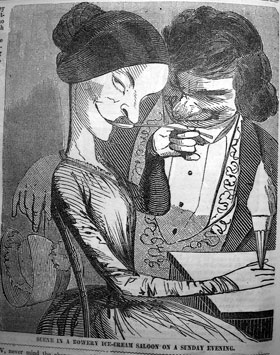 “They are evidently man and wife,” wrote the journalist George G. Foster, of two customers in one of 19th-century New York’s upscale ice cream parlors, “though not each other’s!”

I write about adulterous ice cream and other dark secrets in my chapter on old New York’s high life and low life in the forthcoming Cambridge Companion to the Literature of New York. I’ll be giving a short reading from my chapter at the launch party, free and open to the public, this Sunday night, May 2nd, at 8pm at the Bowery Poetry Club.

In my chapter, I take a quick tour of the literature of the down and out, but since the 19th-century down and out have been fairly well studied of late, I spend most of my page count describing a group of writers less well remembered: the chroniclers of the mid-19th-century rich, including such odd ducks as Charles Astor Bristed, Nathaniel Parker Willis, Régis de Trobriand, Ann S. Stephens, Donald G. Mitchell, George Templeton Strong, and George William Curtis. I discuss such vexing questions as how to mix a sherry cobbler properly, how to throw a party when your brownstone is only twenty-five feet wide, and what to do about the dangerous rash of flirtations between middle-aged women and much-younger men, as satirized in cartoons like this one, from 1852: 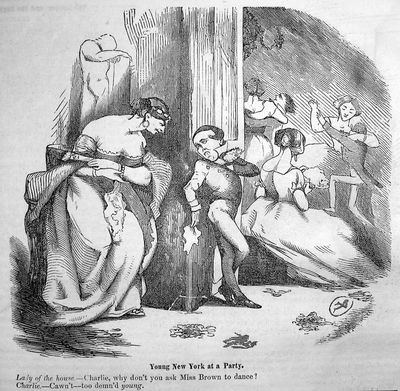 The caption, in case the scan is too grainy to read:

Young New York at a Party
Lady of the House.— Charlie, why don’t you ask Miss Brown to dance?
Charlie.— Cawn’t. Too demn’d young.