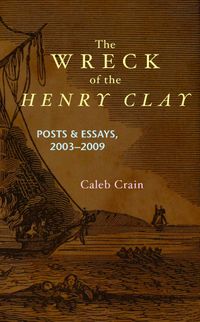 With all the time and energy you've squandered on that blog, you could have written a book. So goes the self-reproach, and indeed, the book in question turns out to be 449 pages long. And you can get it now for just $14.95! [As of December 2014, $9.95.] Seriously. I designed it myself, and I'm afraid it looks it. But it has pictures! And six years of essays, which many of you will already have read, about dogs, torture, etymology, American history, gay marriage, political rhetoric, movies, tree climbing, indie rock, Mars, peak oil, anarchism, and literary criticism. As I explain in a foreword (not available in stores!), I included the "longer and more essayistic" posts, "the ones that I thought it might be pleasant to read while unattached from the Internet." (I left out posts that were little more than references to other things online, and also the "Notebook" posts, which supplement essays of mine published elsewhere, because I think they belong with those essays, when/if they're ever reprinted.)

All of the posts and essays included in The Wreck of the Henry Clay are available free already on this blog, so why should you buy it? I have no idea! I have given up trying to understand the internet's economics, but maybe it'll be like buying ringtones versus stealing MP3s? Who knows. It took a surprising amount of time to turn several hundred blog posts into a several-hundred-page book, so perhaps some of you will be willing to pay me for my PDF-creating skills? As I said, no idea. Let's not call this "self-published," by the way. That has a kind of disreputable sound. It's a chapbook, all right? Why am I doing this? I saw not long ago that someone had published a book of his Twitters, and I felt I was in danger of being behindhand. I am hereby restored to the bleeding edge. Also, now, when the electromagnetic-pulse device is detonated, I will be the only blogger in America with backup. And of course I'm looking forward to kicking back while the cold, hard internet cash at last streams in.

3 thoughts on “The Wreck of the Henry Clay”