The National Endowment for the Arts has just released a new report, Reading on the Rise, which contains good news: In a 2008 survey administered by the Census Bureau, Americans reported higher rates of literary reading than they did in 2002. In earlier reports, the decline of readers between the ages of eighteen and twenty-four had been a subject of special concern. Between 2002 and 2008, however, the proportion in that age group who reported that they had read a work of literature in the previous year jumped by 8.9 percentage points.

I've had an interest in American reading rates for some time, and I wrote an article on the subject for the New Yorker that was published in December 2007, so I read the New York Times article on the report and the report itself with great curiosity. I'm happy that there's some good news on the topic. I nonetheless remain pessimistic about the trend of reading in America overall, and it might be worth explaining why.

Before I do, though, I'll waste a paragraph or three on the Sisyphean task of trying to clear up a common misconception about the NEA-sponsored surveys. It is often claimed that in earlier surveys, the NEA undercounted literary reading because it failed to ask about reading that happened online. This is not exactly true. Starting in 1982, the survey asked, "During the last 12 months, did you read any a) plays, b) poetry, or c) novels or short stories?" Respondents weren't prompted to think about the internet, but they weren't told not to think about it, either, and the NEA has always said that a poem read online counted just as much as a poem read in a book. Moreover, the NEA asked a nearly identical question in 2008 (the only change was a variation in the order of the genres). So if the new report does show that reading rates have indeed recovered, it isn't because the NEA has only just now gotten around to asking about the internet. That, nonetheless, is the latest misconception about the NEA in circulation. For example, on Monday morning, Publisher's Lunch, a publishing insider's newsletter, made fun of NEA chairman Dana Gioia for claiming that his agency was partly responsible for the rise and suggested that the props should instead go to the internet:

Aside from the yeoman efforts of the NEA chairman, what could possibly explain the sudden change? "In 2008, the survey introduced new questions about reading preferences and reading on the Internet."

The quote within the quote is true but the juxtaposition is somewhat misleading. Yes, the 2008 survey for the first time asked about reading preferences (i.e., it asked whether those who read prose preferred mysteries, thrillers, romance, or "other" fiction) and about internet habits. But the central measure—that of literary reading—came from the question I quoted above, the wording of which neither included nor excluded online reading. In other words, the improved results can't be explained by a shift in the NEA's methodology about the internet.

There's another way of reading the Publisher's Lunch passage: PL might have been trying to imply that Internet use has itself spurred the appreciation of literature in the past six years. That, more or less, is the claim made in a similar mocking report in the blog Valleywag. It's a pretty bold claim. It doesn't seem outright impossible to me, because as I noted in my New Yorker article last year, there's some evidence that internet use and literacy go hand in hand. But relatively few of the internet's electrons are devoted to poetry and fiction, and it seems to me on the face of it unlikely that the internet could have caused significantly more people to take an interest in those genres. (Yes, I know about fan fiction, and despite the existence of it I stand by these hunches.)

But enough about the internet. Why aren't I celebrating the new numbers about the reading of literature? First, the numbers are good, but they're not that good. The proportion of Americans who said in 2008 that they read some literature in the previous twelve months may be higher than it was in 2002, but it's lower than it was in 1992, 1985, and 1982. Moreover, the same is true of the rates in the eighteen- to twenty-four-year-old bracket. Over the longer span, we're still talking about a decline.

Second, another of the NEA's measures shows a continued, stubborn decrease. To the question "With the exception of books required for work or school, did you read any books during the last 12 months?" the proportion of respondents saying yes dropped from 56.6 percent in 2002 to 54.3 percent in 2008. Here the internet may be relevant, because the word "book" is generally understood as referring to the ink-and-paper object. But even if the internet is the culprit, I'm still dismayed. Nationwide, there aren't yet that many e-book readers; it's simply not yet possible for very many people to read the electronic equivalent of books. Online substitutions may be taking place, but they're probably not "literary," so I doubt it's good news if the proportion who say they read books for pleasure continues to decline.

Okay, but a piece of good news is still good news, even if it's not great news, and even if another piece of news is bad. Right? Yes, but even of the limited good news I'm skeptical, because I can think of three reasons why the results might not be as good as they seem. First, there's a chicken-and-egg-like measurement difficulty. In the readiness to make fun of Gioia for crediting his own agency with the turnaround, the critics have so far missed a trick. It may be that Gioia does deserve credit, but not for what he thinks he does. The sticky part about the measurement of reading, sociologically, is that reading is a prestige activity. People tend to lie and say they do more of it than they do. As the afterword to the new report points out, the NEA in the last few years has reached out to millions of Americans with brand-new, well-funded programs to encourage reading. In the fall of 2007 it released a report on reading's decline that got lots of attention from journalists like me. Thanks in part to the NEA, literacy was a big news story in 2007 and 2008. I even saw it referred to on television, and I don't watch much television. All of this is worthy and to the good. But it's possible that in raising people's awareness of the importance of reading, the NEA encouraged them to exaggerate their reading habits. With a survey like the NEA's, which relies on self-reporting, there's no way to know for sure whether reading habits themselves were changed. It's as if there were a kind of Heisenberg uncertainty principle at work here. A government agency can either measure reading habits or intervene in them, but if it tries to do both, it runs the risk of measuring no more than the spread of its intervention message. (As I wrote in my article, the best way to measure reading is with a time-use survey, which is harder for respondents to fudge.)

Second, the new survey took place in a different month. In 2002, the NEA's survey took place in August. In 2008, it took place in May. If people had steeltrap minds, that wouldn't matter, but twelve months is longer than most people remember very accurately. I suspect that when you ask people about behavior over such a broad timespan, especially when you're focusing on the subset of people who are the liminal case—that is, on people for whom it was a toss of the coin whether they did or didn't read a work of literature in the past year—respondents may sometimes extrapolate from their sense of themselves in the present, rather than answer according to a comprehensive memory. If that's the case, then the month will influence their answer, if the month happens to have any relation to the aspect of themselves relevant to the question. And in this case it does. Like it or not, literary culture in America is largely keyed to the school year. Search Google Trends for the word "literary," in fact, and you'll see a curve that has acute declines every summer and every Christmas. (You'll also see that it slumps slowly over time, but that's not relevant to my point here.) You'll see the same shape if you search for "poem" and "short story". (Intriguingly, the novel has some but not all of this characteristic wiggle, perhaps because it hasn't altogether surrendered to the academy.) I don't know in which month the 1982, 1985, or 1992 surveys took place. But it's possible that the improvement between 2002 and 2008 owes something to the difference between May and August.

Third, and finally, there's the matter of the years. When Americans were asked in August 2002 about their reading habits over the preceding twelve months, they were of course being asked about the year immediately following 9/11. That was a period when everyone's media intake was wildly disrupted. If you look at the NEA's graph of the percentage of adults who read literature between 1982 and 2008, the outlier isn't 2008. It's 2002. 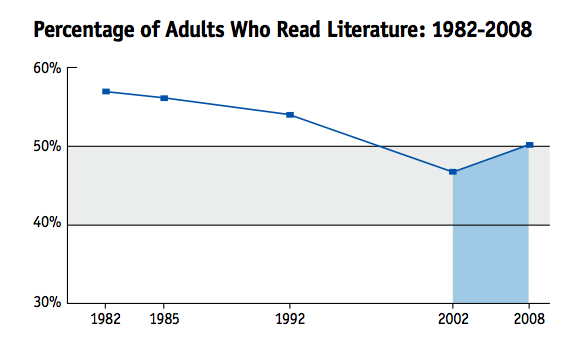 In fact, if you ignore the 2002 results, you're looking at a gentle but almost uncannily straight descending line. One possible explanation of the graph above: Reading has been declining in America for decades, but the 2002 results were worse than they ought to have been, because in the aftermath of September 11 the nation was panicked out of its usual literary diversions. Between 2002 and 2008, the interruption of 9/11 corrected itself, and many people returned to literature, but not all of them. The underlying decline, the part owed to secular causes, continued.

These are mere speculations, and I'm grateful to the NEA for providing the data that I'm reluctant to accept. Time will tell whether I'm just being a curmudgeon; inshallah, my pessimism will be belied. But right now I think it's too soon to unpop the corks. If other indicators were favorable—in particular, if there were better prospects for newspapers or book publishers, or if anyone had figured out how to make enough money off of writing on the internet to subsidize lots of high-caliber investigative reporting—I might be willing to partake in the festivities. As things stand, though, I think the fate of reading is still a matter of concern.

4 thoughts on “Why I remain pessimistic”