I was not a terribly casual young person. When I was about twenty-two, I saw in a Cambridge bookstore an edition of Collected Ancient Greek Novels. It seemed they were the earliest novels ever written. Since I wanted to write novels myself someday, I felt that I ought to purchase and read it. Unfortunately, the earliest novels ever written were not the best, by a long shot. They were meandering, melodramatic, and improbable. I don’t remember how many of the nine novels in the volume I read, because I don’t remember a word of any of them today. But there is incontrovertible evidence that I did read at least one, “An Ethiopian Story” by Heliodorus. I diagrammed it.

Ah, the earnestness of youth! I was just out of college, and I hadn’t yet determined on grad school, but I heard the call of note-taking, even though no one was ever going to quiz me. Until this post, I’m pretty sure that the fact of my having read Heliodorus’ “Ethopian Story” was a dark secret safely kept; it’s not a title that comes up a lot in Brooklyn cocktail-party conversation. 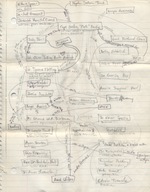 But I should level with you. I’m just warming up the audience, here. This post isn’t really about Heliodorus at all. It’s really about Thomas Pynchon, and the five-page diagram, along the same lines but on a much more grandiose scale, that I drew while reading Gravity’s Rainbow. I think I drew the Pynchon diagrams a year or two before the Heliodorus one; as you will see if you dare to click, the Pynchon diagrams are a bit more passionate, if not outright mad. Today there are reader’s companions to Gravity’s Rainbow, but there weren’t at the time. I’m not sure the diagrams will be useful to any other readers, but they were useful to me back then, partly as a memory aid, but mostly in the way of channelling and venting what felt like a possession. If you haven’t read Gravity’s Rainbow, and you wish you knew the human intermediaries that connect “Grigori (octopus)” to “Milton Gloaming (statistician)”; or if you happen to be in the midst of reading the novel, and it would help to be reminded that “Geli Tripping (balalaika, witch)” is in the harem of “Vaslav Tchitcherine”; or if you just want to admire the way all the lines converge on Slothrop—then by all means knock yourself out. 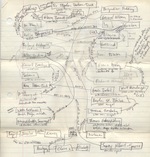 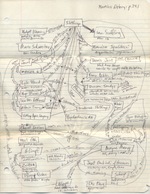 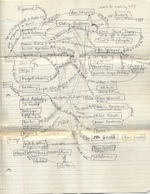 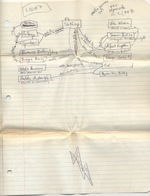