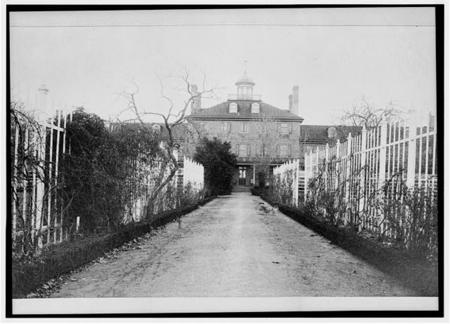 In 2000, a developer bought a 10-acre plot of land on the bank of the Delaware River in Tinicum Township, not far from Philadelphia’s airport, with the intention of paving it into a parking lot. Surviving on the site through a century of benign neglect was a quarantine house known as the Lazaretto, built in the late 1790s for yellow fever patients and used until 1893 as an immigrant processing center—like Ellis Island, but a century older. The Federalist-era building, seen here in a 1936 photograph in the Historic American Buildings Survey (survey number HABS PA-125), still stands, and still looks pretty good in current photographs. In 2001, local preservationists raised a stink about the proposed parking lot, and the Commonwealth of Pennsylvania gave Tinicum Township several million dollars to keep the site intact. This spring, however, it emerged that the township’s preservation plan is to build an enormous fire station/evacuation center on the property. The Lazaretto building won’t be destroyed, but it will be more or less engulfed in the firehouse’s embrace. The National Park Service, among others, protested. The preservationists wanted to turn the site into an Ellis Island-style museum and historic center, but they seem to have run out of time. The township awarded the construction project to a contractor in late August; groundbreaking was scheduled for September 11. I haven’t heard whether the ground has in fact been broken, though.

Throughout the debate over the Lazaretto, tempers have run high and short. The preservationists have raised questions about the town’s choice of how to use the state funds, and have suggested that the evacuation center is a boondoggle (i.e., that its real purpose is as a moneymaking banquet hall/conference center) and that breaking ground will unearth pathogens from yellow fever victims buried there. The town’s manager resigned mid-summer, though it’s not clear that he resigned over this issue. One of the town’s commissioners, however, did issue a statement in July defending the firehouse plan from meddling outsiders. Tinicum’s officials seem to feel that they’re being punished now for their good deed four years ago of saving the site from becoming a parking lot, and they suggest that if they hadn’t alerted the preservationists early on, they could have built their firehouse unimpeded. To judge from the comments on the preservationists’ website, there are some local residents who agree, and others who are upset that a historic site is being rendered inaccessible to the public so soon after it was rediscovered.

2 thoughts on “An 18th-century Ellis Island, saved and lost”