Today in a giveaway pile, I found the General View of the Agriculture of the County of Durham. John Bailey wrote it in 1810 for the Board of Agriculture and Internal Improvement, and the poet John Clare, who regretted agricultural improvements, would not have liked it. He would have especially disliked Bailey’s response to a question about enclosures:

But I found that I could not resist Bailey’s book, despite his antipathy for vagabonds, because it has such lovely engravings of Mr. Mason’s cow and of the Durham ox, “bred by Mr Charles Colling.” 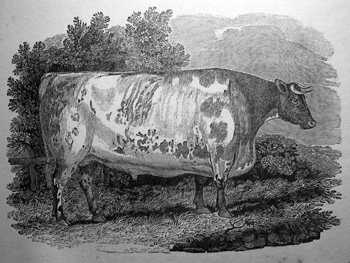 “His form and nice handling” — that is, the Durham ox’s, upon his birth in 1796 — “indicated every disposition to fatten at an early age, and the expectations entertained of him by the best judges, were not disappointed,” as you can see for yourself above.

But the ox is not the best thing in the book. Better than the ox, better than the cow (whose rump is a little too well developed to post to the web) — better even than the plate illustrating the various patterns in which the residents of Durham county plant their cabbages — is a list of “Provincial Terms” at the back.

The specificity of the words is beautiful, and so is the sound of them. A Bink is “a seat of stones, wood, or sods, made mostly against the front of a house.” Bute or Boot is “money given in bartering horses, &c. to equalize the value” — maybe an ancestor to our “booty”? It might be, because some of the words aren’t strange: Crying is “weeping,” and Flit is “to remove from one dwelling to another.” It’s unexpected to an American that Mr. Bailey feels obliged to explain that Inkling means “an intimation,” Smash means “crush, Youl means “to howl like a dog,” and Rung means “a round of a ladder.” The words must have crossed the Atlantic in steerage.

It’s the ones I’d never heard of, however, that I found strangely moving. Darking is “listening obscurely or unseen.” Lake is “to play” (like lark?). Storkin or Storken is “to grow stiff: as melted fat cooled again,” a word every cook has felt the lack of. Wankle means “uncertain,” and a Dreerood is “a long and weary road.” At midnight, even a lingey man might flacker, flaid of the dreerood he must walk down before he comes to his home. Froating is “anxious unremitting industry,” which I am glad to have a word for, and Pubble means “plump, full: usually said of corn of grain when well perfected.”