I insinuated a couple of weeks ago that if literacy levels were mapped against votes in the last election, a pattern might emerge. I have just squandered a few hours trying to cipher out this pattern, without much success. 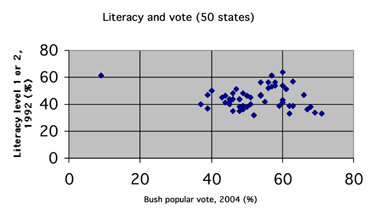 This is a scatterplot, state by state, of the popular vote for Bush in the 2004 election graphed against the percentage of the population at level 1 or level 2 literacy in 1992. (For definitions of level 1 and level 2 literacy, look here; there are five levels, and level 1 is the lowest.) My election results are from CNN, and my literacy estimates are from the 1992 National Adult Literacy Survey by way of the National Institute for Literacy’s State of Literacy in America analysis.

To cut to the chase, blue-state cultural elitists should want the scatterplot to cohere into a line that slants upward as it moves right. Red-state cultural elitists should want to see a line that slants downward as it moves right. I don’t see either, but a real statistician would want to do something complicated like a regression analysis, or at least weighting the points according to population, before he made any pronouncements. A real statistician might also want to get the numbers by county, which are available, or wait for the July 2005 release of the 2003 literacy survey from the National Assessment of Adult Literacy. But I do not even really qualify as a fake statistician.