Maybe the conception of a novel has to come during the dying of a year—a new world created out of the sorrow of losing the one you’re in.

No one will share an e-cigarette, so the habit will die out. Also, if one is allowed to smoke them inside, they’ll be deprived of cigarettes’ other great attraction: the pretext for a break outdoors.

“People are like butterflies. . . . But a butterfly under a magnifying glass is a monster.” —Jiří Mucha

“If there had been many of us and we could have found each other out, there’s no knowing what we mightn’t have done.” —Kate Croy’s disreputable father, in Henry James, The Wings of the Dove

All things are busy; only I
Neither bring honey with the bees,
Nor flow’rs to make that, nor the husbandry
To water these.

Why does the dog follow the vacuum cleaner around with such a stricken look?

The god Internet is hungry, and demands to be fed with a master key to all Brooklyn-literary-scenester romans-à-clef.

About halfway through Wings of the Dove one catches a distinct whiff of The Sacred Fount: Can Milly be cured by fucking?

“Something whispers us that we have no right to make a mock of calamities like these, or to turn the truth of things into the puppet and plaything of our fancies.” —Hazlitt, on King John

My one hope is that when civilization finally starts to dissolve, there will be a few weeks when I can get away with bringing my dog to the movies.

The beginning of corruption is when one is given a secret.

Is it possible to have meaningful oversight of a secret organization without compelling it to reveal the truth about itself to people it doesn’t necessarily trust?

You may my glories and my state depose,
But not my griefs; still am I king of those.

“I am Richard II, know ye not that?” —Elizabeth I

“I tried just awfully hard. But that’s the fascinating thing about art, anyhow; that good intentions and praiseworthy industry don’t count a damn. If they did, it wouldn’t be much more interesting than bookkeeping.” —Willa Cather, Letters

“If you should marry the handsomest, and most accomplished and superficially agreeable man in the world, you little know the misery that would overwhelm you, if, after all, you should find him to be a worthless reprobate, or even an impracticable fool.”

“But what are all the fools and reprobates to do, aunt? If everybody followed your advice, the world would soon come to an end.”

“. . . and my hair—only my hair, nothing else—looked drunk.” —Dickens, David Copperfield

“And you are one of the fortunate ones who can?” said Miss Ridley, using a dry tone.

“I am one of the unfortunate ones who do. That is how I should put it.”

—Ivy Compton-Burnett, The Present and the Past

How strange Untermensch looked, small and dark, gripping his briefcase, the sign of the undefeated intellectual, and looking in his eagerness like some bonze of an unknown religion, approaching the source of his devotion!”

beriozka (noun): a hard-currency shop in Russia, during the Communist era (like Tuzex shops in Czechoslovakia)

Everyone else had gone, during the two days they had just spent in Leningrad, to the berioska shop, and had bought themselves a large fur hat with ear-flaps.

“Incidentally, in the interests of accuracy, I did not appear as a clown, but as an auguste, who does not speak.”

ait (or eyot) (noun): a small island in a river

But what struck me most was, that, from the time they began to congregate, forsaking the chimneys and houses, they roosted every night in the osier-beds of the aits of that river.

cere (noun): the skin at the base of a bird’s beak

Its cere and feet were yellow, and the circle of its eyelids a bright yellow.

He was old enough that sometimes, at a distance, he mistook the yoke in the wires of an Iphone headset for a crucifix.

She was standing by herself, looking at the painting of a mythological subject on the cassone.

It was late capitalism again, so late that the children of the rich had given up the wish to be artists of anything but retail.

“The moment was to come—and it finally came with an effect as penetrating as the sound that follows the pressure of an electric button.” —James, Golden Bowl

“The ordinary detective discovers from a ledger or a diary that a crime has been committed. We discover from a book of sonnets that a crime will be committed.” —G. K. Chesterton, The Man Who Was Thursday

“There were times when lust felt like a kind of idealism.” —Damon Galgut, Arctic Summer

A category: people in the city whose names you aren’t expected to know and who don’t know yours but who recognize you and whom you recognize.

“I belong to an unfortunate generation, swung between the old world and the new, and I find myself ill at ease in both.” —Giuseppe di Lampedusa, The Leopard

“Nothing could be decently hated except eternity.” —Lampedusa, Leopard

America promises never to torture again unless it feels like it has to.

“I am not a young man in a novel.” —Joseph Conrad, Under Western Eyes

poke (verb): to aim one’s gun at a moving target, rather than swinging and firing

The necessity of wasting no time and of killing with certainty had a terrible effect upon the shooting, making me poke out of anxiety.

eyas (noun): a young hawk, not yet fully trained [it’s etymologically the same word as the French niais, but it swapped its n with the indefinite article, the way an eft and a newt did]

It must have been a family, the parents and two or three eyases already well grown but not yet driven out.

vinaigrette (noun): a bottle or box holding a sponge soaked with smelling salts

Apparently the presence of a clergyman of the Church of England in her morning-room was consolation enough, as though, like some moral vinaigrette, he had but to be filled by a bishop, introduced, unstoppered, and gently waved about the room, to diffuse a refreshing atmosphere.

spinney (noun): a small clump of trees, planted or preserved in order to shelter game birds

. . . the portrait of grandpapa Aspen, . . . paused on the brink of his spinney and listening with contemplative pleasure to the footsteps of the poacher within.

My review of Hermione Lee’s biography of Penelope Fitzgerald appears in the January 2015 issue of Harper’s, which should be showing up in subscribers’ snailmailboxes imminently, and appear on newsstands in a week or so. Herewith, a teaser: 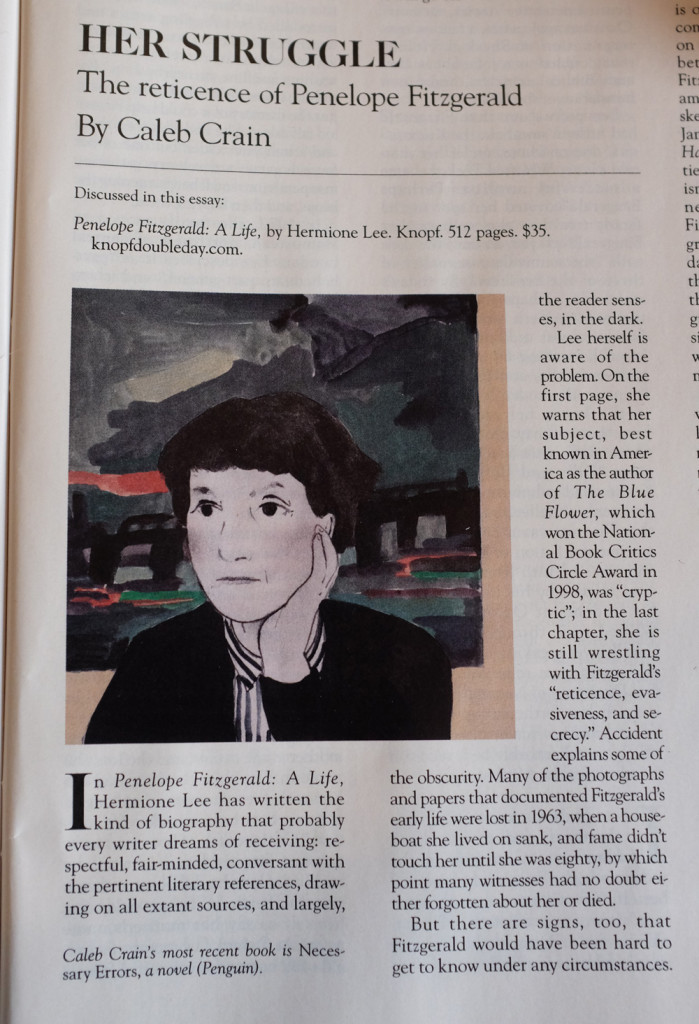