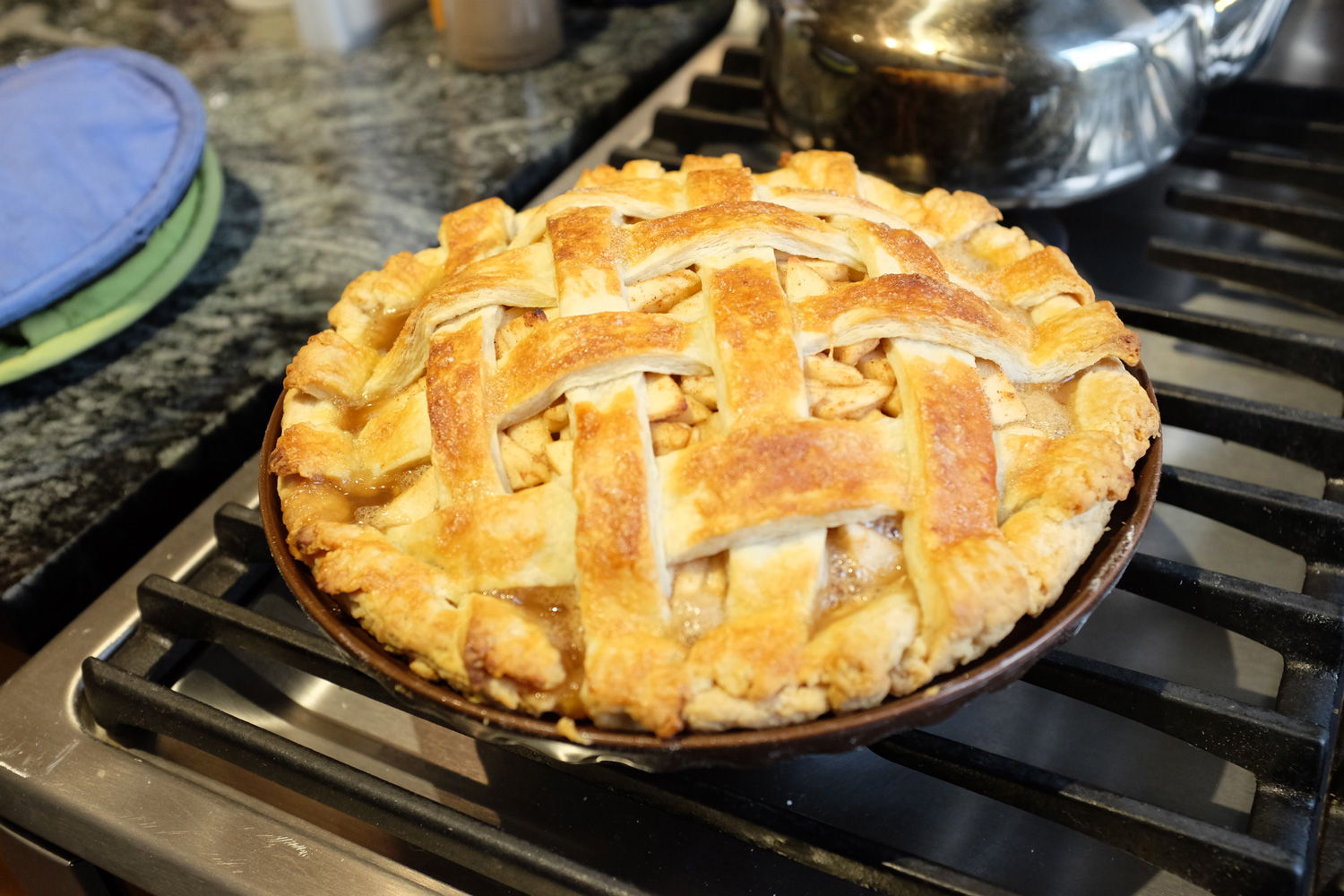 NOTE: This recipe has been superseded.

I went a little crazy with apple pies this month, varying the procedure a little each time, and here’s the recipe I’ve ended up with. To keep the crust flaky, I borrowed one trick of Julia Child’s (use a little cake flour instead of only all-purpose flour) and one trick of Kenji López-Alt’s (use vodka instead of water). In the end I voted against sweating the apples before cooking them, because you seem to lose some of the flavor that way.

One day ahead of time:
In a large mug or tumbler, combine ice cubes and vodka. Let stand at room temperature, so that the ice melts a little.

Into a large food processor, pour the all-purpose flour, cake flour, sugar, unsalted butter (roughly chopped up), and salt. Pulse for about 30–60 seconds, until evenly mixed and sandy-looking.

Add about 2/3 cup of the vodka and meltwater, straining out any ice cubes. Pulse again, for another 30–60 seconds, until not-quite-as-evenly mixed and pebbly-looking.

Pour the debris onto a smooth cutting board, and shape into two balls of equal size. Quickly and briefly squish each ball at a few different angles to make sure that the dough in it is well stuck together. Then shape each ball into a stubby disk—roughly the size and shape of a hockey puck. Slide each puck into a plastic sandwich baggie, seal the baggie, and refrigerate overnight (or for at least three hours).

Lightly flour a rolling pin and smooth cutting board. Roll out one hockey puck, lightly (and repeatedly) flouring it on both sides as you work in order to prevent it from sticking. Start very gently. Vary the compass point of your rolling pin as you go, and flip the dough occasionally. When the sheet of dough is wide enough to cover a ceramic pie-baking dish, place it in one, letting it droop over the edges, and refrigerate it. After rolling the second puck, too, into a sheet of dough, place it on a large, flat dinner plate, and refrigerate it as well.

Squeeze the juice of half a lemon into a large mixing bowl. Peel, core, and finely slice the apples. As you measure out each cup’s worth of sliced apples, toss them into the mixing bowl to coat them in the lemon juice. Add the cinnamon, nutmeg, allspice, salt, corn starch, and brown sugar. Stir until all the apple surfaces are coated.

Gently press down the dough in the pie-baking dish, to make sure it’s touching the ceramic. Pour in the apple mixture, including any juices. Use your hands to shape the apple mixture into a dome that fills the pie cavity. Slice eight parallel strips out of the sheet of dough that’s lying on the dinner plate. Lay the first strip over the apple-dome vertically, just to the east of the north-south-running Greenwich meridian. Lay the second strip horizontally, just below the west-east-running Equator. Lay the third strip vertically, just to the west of the Greenwich meridian. Lift up the top of the first strip, gently folding it back toward you. Lay the fourth strip horizontally, just to the north of the Equator, so that it runs over the third strip but under the part of the first strip that you have lifted up. Then let the top of the first strip fall back into place. Continue laying strips, lifting and lowering the ends of other strips as necessary, aiming for a total of four vertical and four horizontal strips, interwoven. Fold the ends of the strips, as well as any excess circumference of the lower pie shell, downward, tucking the margin under the lower pie shell and inside the pie-baking dish.

Bake on the lower rack of the oven for 25 minutes. Then lower the oven temperature to 375ºF, shift the pie to the oven’s middle rack, and bake for another 30 minutes. Let the pie sit on a trivet or cooling rack for at least three hours, until the juices from the apples are re-absorbed.