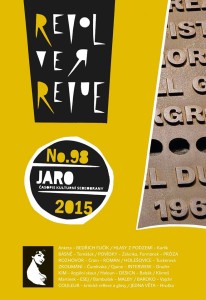 The spring 2015 issue of the Czech literary journal Revolver Revue prints an interview with me conducted by Veronika Tuckerová, which she has translated into Czech, as well as an excerpt from my novel, which she has also translated. Very happy about this! Tuckerová reviewed the book in an earlier issue of Revolver Revue, and an English translation of her review has been published by the Aspen Institute.

In other news about the novel: the English-language book made an appearance in the 2014 year-end roundup of the film critic Daniel Carlson. An interview with me, translated into Italian, appears on the website Gioia, in the course of which a pretentious reference of mine to “negative capability” is transfigured into a new word, “kidcapability.” And a set of elegant photos of the Italian edition of the book appear on the website Federico Novaro.

One thought on “An excerpt of “Necessary Errors” in Czech”