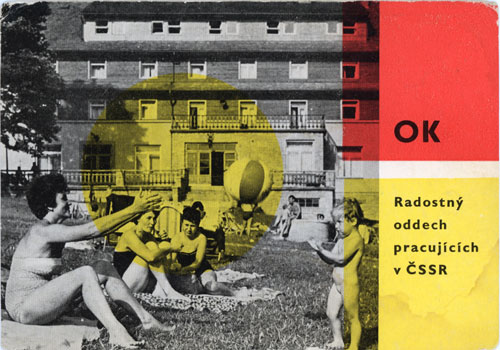 This is a QSL card from Czechoslovakia—that is, a postcard that a ham radio operator in Czechoslovakia could send to an operator abroad in order to confirm hearing his signal. I would guess that the card dates from the 1960s. “OK” is the prefix for a range of ham radio call signs in the Czech Lands. I’m not quite sure how to translate the legend. A literal-minded attempt: “The joyful recreation-period of workers in the Czechoslovak Socialist Republic.” Utter propaganda, of course, though the scene does look rather pleasant.

The image reminds me, in mood if not quite in style, of Czech Eden, a photo book by the American photographer Matthew Monteith. The delicate pastels of Monteith’s interiors, such as this communal dining hall, seem to me an ideal complement to the black-and-white photos of Iren Stehli. Stehli’s photographs are more intimate, but the light in Monteith’s is sweeter. Whereas Stehli’s photos were taken in the decade or so before the Velvet Revolution, Monteith did his work a decade or so after it. And whereas Stehli photographed as an exile returning to her native land, Monteith photographed as an outsider and played a little—consciously, I think—with the ideal image that a country presents to someone who doesn’t know it well. You can see more of Monteith’s Czech photos here.

If this image were included in an extra-illustrated binding of the novel Necessary Errors, the binder would be at liberty to position it pretty much anywhere. (For an explanation of extra-illustration, click here.)