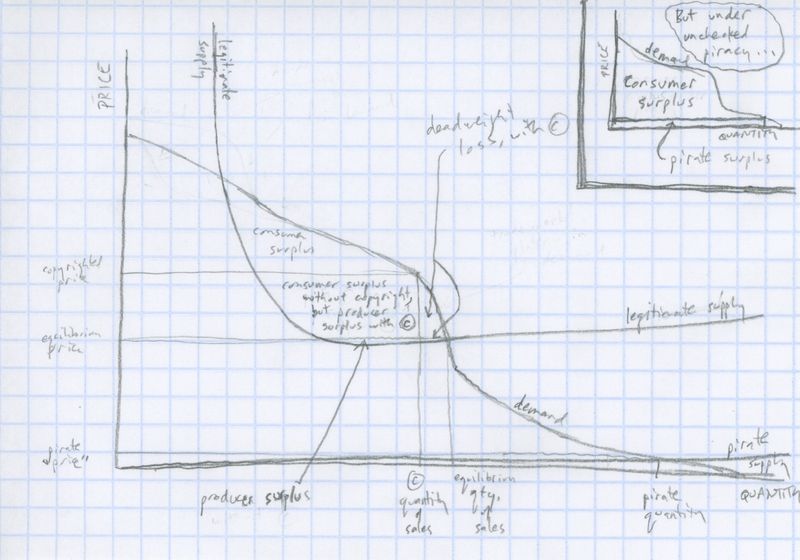 Over at Slate, I’ve written a response to Matt Yglesias’s reply to my criticism of his ideas about piracy and copyright.

In the last paragraph of my new post, I qualify my assessment of piracy’s impact on copyright by wondering “if I’m drawing the graphs correctly.” Should anyone want to inspect those graphs, here are a couple! As I’ve said repeatedly, I’m no economist, so they could be riddled with errors. I didn’t draw the supply curve as a straight, upward-sloping line because I’ve always understood that in the book-publishing world, publishers are willing to sell books cheaper if they can sell more of them, and editors spend much time and energy trying to guess whether demand will be sufficient to justify a low price, or insufficient and require them to charge a high one. This may be an elementary error for all I know; if it is, please accept my apologies and straighten out my supply curve. If I’m right about the shape, though, it means that the surplus that a producer can rely on, even if he doesn’t have copyright protection, is just a tiny horizontal slice, lying like a pancreas under a liver, hard to see unless you click on the graph and view it full size. I drew the demand curve with a hump in it because it’s my impression that the audience for a given art work has a natural size, who won’t be deterred by a slight increase in price or much encouraged by a slight decrease. I could be wrong there, too, of course. The inset that I drew in the upper right corner, by the way, is intended to show how unimpeded piracy apportions the economic value of a work of art. As I write in my latest Slate piece, unimpeded piracy “cedes almost the whole triangle under the demand curve to consumers—transferring just a sliver along the bottom to the pirates themselves and leaving virtually nothing for legitimate publishers.”

I wondered about that claim after filing my article, and found myself doodling another graph yesterday afternoon to speculate more methodically about what happens when pirated work competes with copyrighted work. It seems to me that what you need to do is see where the demand curve meets the total supply curve, which is the sum of the legitimate supply curve and the pirate supply curve. Those curves have to be added along the axis of quantity, not price, so if nothing is impeding piracy, don’t bother going any further—the little inset that I drew in the graph above is fine. If piracy is “taxed,” however, by social disapproval, legal jeopardy, or some other inconvenience, the pirate supply curve gets shifted upward along the price axis, and when you add together a taxed pirate supply curve and a legitimate supply curve, you get something that looks a little like a sideways tuning-fork prong, in darkish pencil in the graph below. A tax on pirates makes it possible for legitimate publishers to stay in the marketplace. If the tax is high enough to raise the effective price of a pirated work above the copyrighted price, the legitimate publishers lose nothing, comparatively speaking. If the effective price doesn’t rise that far but does rise above the equilibrium price that would obtain in the absence of copyright and in the absence of piracy (a somewhat notional distinction, IMHO), producers can’t get as large a surplus as they would under copyright, but they can get something. If the tax doesn’t raise the effective price of a pirated work above the notional equilibrium, however, it looks as if producers get no surplus at all.

Advisory: These graphs should be accorded no authority other than as samples of what happens when a humanities-type person tries to puzzle out an economics problem. 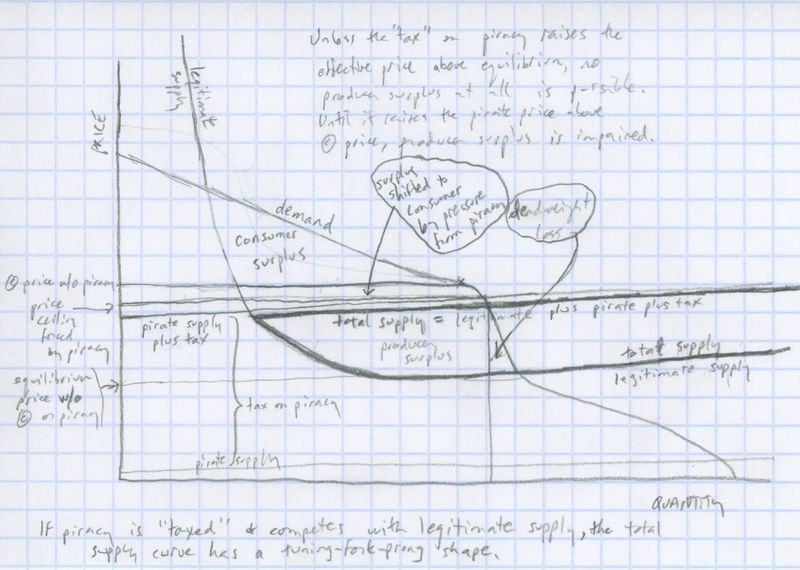 9 thoughts on “Walking the plank one last time”