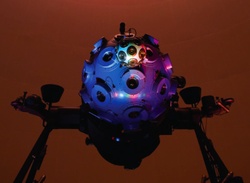 Last night, during the second presidential debate, John McCain accused Barack Obama of voting for a $3 million earmark for an “overhead projector” for a planetarium in Chicago. “My friends,” said McCain, “do we need to spend that kind of money?”

Today the planetarium has defended itself. In a statement on its website, the Adler Planetarium explains that the equipment they wanted to replace is a Zeiss Mark VI projector, not an overhead projector, and the planetarium didn’t receive a new one, because the funding effort failed. The existing projector is forty years old, “is only the Adler’s second in seventy-eight years of operation,” and the manfacturer no longer makes parts for it. Moreover, “the Adler has never received an earmark as a result of Senator Obama’s efforts,” though they have received some federal support thanks to others, and they aren’t bashful about it, because they think science education is a worthwhile cause.