Not really, of course. I believe paper-based books, also known as codices, are here to stay, even if the advent of foldability does threaten to render electronic reading devices somewhat cuter than heretofore.

Nonetheless, over the last few months, in intermittent fits of sentimentality, I have accumulated a wee library of printed materials that seem to be mementoes or comments on the decline of certain aspects of book culture.

1. To celebrate all things analog, from transistor radios to lighthouses, Simon Roche of the Irish-Danish design firm Field has produced a magazine titled The Radio Post, which I learned about from my boyfriend, Peter Terzian, who wrote about it for Print magazine recently. The Radio Post is an extraordinarily beautiful thing, because it’s in form a folded broadsheet, printed in silver ink on black paper. Fedrigoni’s Savile Row Tweed Paper, to be exact. On one side, poster-size, is a photograph of Simon’s father at the horse races, years ago. On the other are small articles and images, including photos of a low-tech recording studio used by the White Stripes and an extract from Seamus Heaney’s Nobel acceptance speech. The best thing is, it’s free to the first thousand comers, provided you send a non-electronic letter or postcard asking for it. Write to The Radio Post, Republikken Building, Vesterbrogade 24b -2.Sal, 1620 Copenhagen V, Denmark. It arrives in a stamped and numbered envelope.

2. But maybe nostalgia is not your thing. Maybe, in the defense of book culture, you prefer . . . gunshots and car chases? In that case, order Jason Shiga’s Bookhunter from Sparkplug Comics for $15. You can also read it online, but that would sort of defeat the point of defending book culture, wouldn’t it. The premise is that it’s 1973, and an 1838 Bible at the Oakland Public Library has been swapped with a high-quality simulacrum. A crack team of special agents from the Federal Library Police are called in to investigate. In the name of library science, the agents are of course licensed to kill. My favorite moment comes during a chase scene, when an agent crawls out of the cab of a bookmobile while it’s in motion, à la Keanu Reeves in Speed or Buster Keaton in The General, in order to reach a reverse telephone directory in the library part of the vehicle. Hands-down shoe-in for the most creative use of a card catalog in motion pictures. 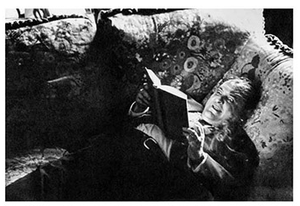 3. If you don’t like your books about books to be sullied by actual words, there’s Zero Mostel reads a book, a photo pamphlet by Robert Frank, originally issued by the New York Times as a giveaway in 1963 and now reissued by Steidl for $27.50. Mostel seems to be performing Harold Bloom avant la lettre, or a more theatrical version of Bloom, if that’s possible—threatening to punch one volume, savoring another with a magnifying glass and a cigarette, and goggling at what must be a true-crime tale with bug-eyed glee.

4. On the studious end of the spectrum, meanwhile, Anthony Grafton has expanded his November 2007 New Yorker article on the future of reading into a small book, Codex in Crisis ($30). It is published, rather lavishly, by the Crumpled Press, in a limited edition of 250, with an engraved cover and a fold-out color reproduction of Felice Giani’s The Burning of the Library at Alexandria. The opulence risks making the book itself sound precious, but it isn’t. Given free rein, Grafton is able to go into more detail about such matters as his first-hand experience of the financial constraints of running a scholarly journal in the internet age; the frequency with which Google Books’ character-recognition software renders the Latin word “qualitas” as “qnalitas”; and the ineffable something that is added to scholarship when a researcher shares a physical workspace with sleepy vicars who visit the Bodleian in their bedroom slippers.

5. I’ve recommended the photographer Moyra Davey’s books of images and essays about books before, and Long Life Cool White ($24.95) and The Problem of Reading ($12) are still highly recommended. (By the way, Davey’s piece Bloom is on display at the Metropolitan Museum of Art until 18 October 2008 in the exhibit “Photography on Photography: Reflections on the Medium since 1960.”) 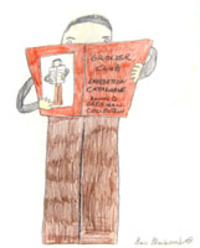 6. Finally, and just as aesthetically, the Spartanburg Art Museum of Spartanburg, South Carolina, is selling the catalog to its exhibit People Reading, depictions of readers in paint and ink collected by Donald and Patricia Oresman. The Oresmans, a Manhattan couple with a 1,250-square-foot private library with 23-foot ceilings, own more than two thousand such images, which have been featured in The Paris Review and The New Yorker. They have loaned sixty to the Spartanburg Art Museum, and while they’re all visible online, the pictures are bigger and better in print, and the catalog only costs $5 (plus $5 shipping).