Yesterday we went to the Gustave Courbet exhibit at the Metropolitan Museum of Art. It was the show’s last day, so it’s not very timely of me to blog about it. But I happened to notice a number of parallels between Courbet and another realist painter, Winslow Homer. (According to Google, real scholars have remarked on the parallels before; I’m just playing amateur here.) Homer was somewhat younger than Courbet and an American. Evidently he went to France just after the Civil War, and he would have encountered Courbet’s work then, but that’s too late, biographically speaking, to explain the parallel that I found most striking, that between Courbet’s The Meeting, or Bonjour, Monsieur Courbet (1854) and Homer’s Prisoners from the Front (1866), which Homer seems to have painted before he left America. 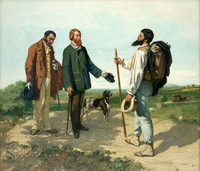 Courbet painted himself as a virile young wanderer with backback, walking stick, and hat. (There seems to me, by the way, to be something Walt Whitman-esque in Courbet’s early portraits of himself in schlumpy hats, champing on provincial-looking pipes—something of the artist hamming it up as a proletariat, in the days when the revolutionary scent of 1848 still hunt in the air.) The bearded redhead saluting him is his patron, Alfred Bruyas, accompanied by a slouching servant. If Homer did have Courbet’s painting in mind, and perhaps he saw a fellow-artist’s study-sketch of it, or a lithographic reproduction, it’s intriguing that in the patron’s place stands an equally redheaded Confederate soldier, and that the Union soldier who captured him stands in the artist’s. (The superposition brings to mind Henry Ferris, the American painter-hero of William Dean Howells’s 1875 novel A Foregone Conclusion, who enlists in the Union Army at the end of the book.)

The other two parallels I noticed weren’t in composition but merely in subject matter and feeling-tone. First, the ocean: 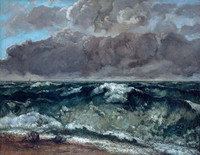