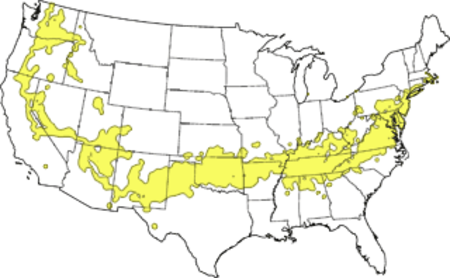 The Washington Post reported last week that crape myrtles and camellias have an easier time of it these days in Washington, D.C., thanks, at least in part, to global warming. According to a new revision of the National Arbor Day Foundation’s map of hardiness zones, if a tree likes it hot, it will find congenial temperatures considerably to the north of where it found them a decade and a half ago. "You could say D.C. is the new North Carolina," a botanist told the Post.

Streetsblog (which covers the human ecology of New York City, broadly considered) therefore speculates that New York City must be the new Baltimore. It is, as you can see above; the yellow-colored zone 7 handily includes both cities, as well as Tennessee, Oklahoma, and the Texas panhandle. In fact, though, Baltimore and Brooklyn seem to have both belonged to zone 7 in 1990, as well. What’s new is that in 1990, the two cities were at the northern edge of the zone, and now they’re inside it by a large and comfortable margin. To see a neato animation of hardiness zones across the nation shifting northward, from 1990 to 2006, like a rising tide of particolored molasses, consult the National Arbor Day Foundation’s website. Then go buy a live oak for the front of your brownstone.