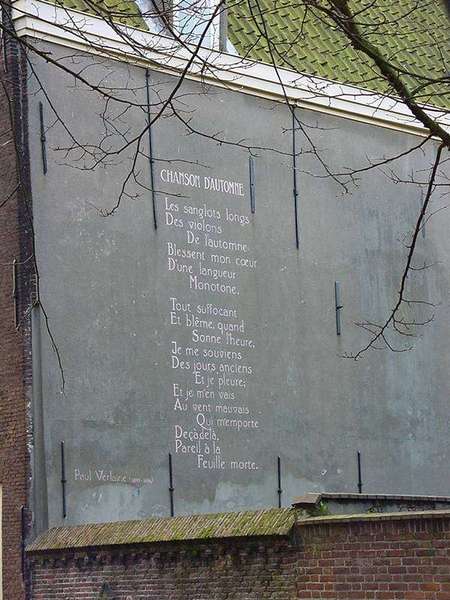 You probably already knew that Serge Gainsbourg ripped off Paul Verlaine’s "Chanson d’automne" in his song "Je suis venu te dire que je m’en vais" ("I’ve Come to Say I’m Leaving"). In the poem, Verlaine remembers the old days and cries; in the song, the woman whom Gainsbourg is dumping does. (And maybe he ripped it off again in "Black Trombone," which, like Verlaine’s poem, rhymes monotone with automne; the idea of rhyming both words with autochtone, however, must be unequivocally credited to Gainsbourg.)

You may not, however, have known that the poem is painted on a wall in Leiden, the Netherlands. I was turned on to the wall poems of Leiden by a new blog, A Different Stripe, produced by the always-excellent New York Review Books (NYRB) series. Worth checking out.