I was going to spend the last few hours of my holiday scanning in some photos I took in Czechoslovakia a decade and a half ago. But when I took the prints out, I had the suspicion that they had faded over the years. (The alternatives were that I hadn’t noticed a light leak in the camera at the time, or that my memory betrays me—both entirely possible.) I seem to be morphing into a serious photo nerd, and so I tried scanning both a negative and a print and comparing them. Here are the results, the print first, the negative second. 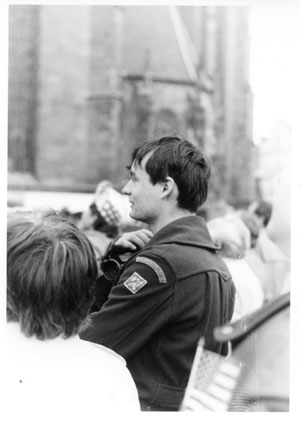 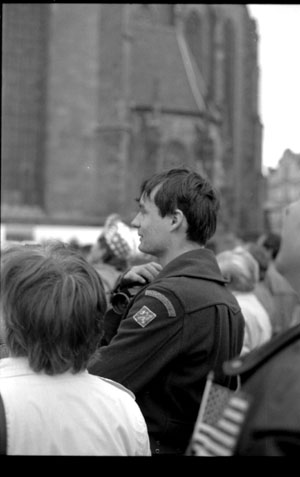 Now, of course, there’s no way I can just scan the prints. And the negatives are still rolled up tight in the tissue paper that Fotografia Praha wrapped them in, and they’d have to be cut and flattened before I could get to them. So I’m afraid that for now there will only be this one, accessible because it happened on the end of a roll, which I left dangling over the edge of the scanner. For the record, it was taken the spring of 1991 in Plzen, at a celebration in honor of the U.S. Army’s 1945 liberation of the western Czech lands. (During the preceding 45 years or so, the Communists had ordered the history books to say that the Russians had liberated the entire country.)