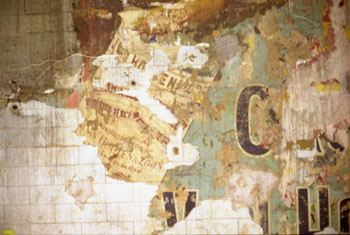 Subway wall, Paris, October 2005. A little fuzzy, because it was taken with a handheld Canonet, no flash. The wonder is it came out at all. I’m posting it in memory of an old sign, formerly visible in my neighborhood, of a snowman, whose photograph is here. The snowman was recently replaced by a large commercial billboard of rotating wheat-pasted posters—this week, of the Strokes’ new album. Oh well.