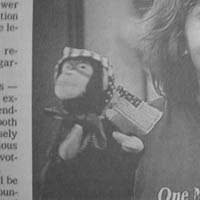 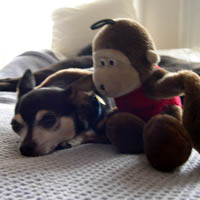 BROOKLYN—Peanut, the chewtoy monkey, took steps this morning to reassure friends of his liberal credentials, after a photograph appeared in the New York Times of a similar monkey involved in a protest action against gay marriage in Missouri.

Peanut denies any contact with the Missouri monkey, who is thought to be a hand puppet.

A chihuahua close to Peanut said she accepted Peanut’s explanation. The chihuahua asked not to be named. A mixed-breed dog seemed at first to welcome Peanut’s statement, but then threatened to rend and disembowel the plushy monkey, removing his squeaky and stuffing. Analysts suggest, however, that this threat may not be related to the mixed-breed’s sociopolitical beliefs.