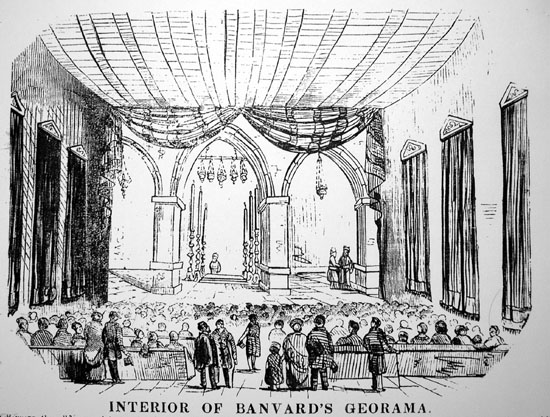 A few months ago I ran into my friend Paul Collins, who was in town in connection with his fascinating, moving memoir of his son’s autism, Not Even Wrong, and I rashly told him that I’d stumbled across an illustration of Banvard’s panorama that I’d email to him. Paul wrote about the rise and precipitous fall of John Banvard and his three-mile painting of the Mississippi in an early issue of McSweeney’s and in his first book, Banvard’s Folly.

I say “rashly,” because when I went back to my desk to check my notes, I couldn’t find it. Months later, thanks to lucky rummaging, here it is. It’s from the New York Atlas of 9 January 1853. The three figures in Renaissance costume beneath the Gothic arches may look like actors in costume on a stage, but in fact they’re part of a painting that’s unrolling from one hidden cylinder and rolling up on another.