About a year ago, I wrote an entry about the mid-nineteenth-century New York City custom of dog slaughter. The city offered fifty cents for every stray turned in, and the roundup seems to have struck everyone as a bit gruesome. The other day, while looking for a caricature of a divorce lawyer, I stumbled across this cartoon of protesting dogs in the 27 May 1852 issue of Joseph A. Scoville’s humorous weekly The Pick, and I couldn’t resist printing it out from the microfilm. (Alas, the divorce lawyer’s caricature must have been in an issue that wasn’t microfilmed. According to a 1930s-era bibliography, two libraries in the world then had paper versions of The Pick for 1852, so there’s a chance that the caricature I was looking for—and an unscratched version of this one, for that matter—still survives.) 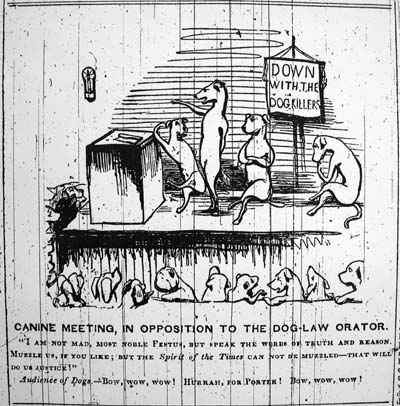 The “Porter” in the caption must have been William T. Porter, editor of the sporting and humor magazine The Spirit of the Times, who presumably took the dog-friendly position on the issue.