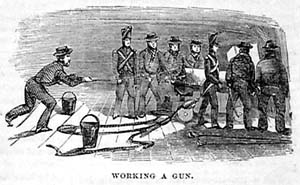 The age-of-sail nerd in me loves the detail in Master and Commander: The Far Side of the World. And surely I’m not the only such nerd grateful to hear eight bells rung, to observe a beating to quarters, to see the decks being holystoned, and to appreciate that the left side of the ship in 1805 would have been called “larboard,” not “port,” because Captain FitzRoy (Charles Darwin’s half-mad companion on the HMS Beagle) hadn’t yet suggested renaming it so that it didn’t rhyme with “starboard.”

The Melvillean in me noticed how much was borrowed from his novels, or at least borrowed from the sources that Melville borrowed from. The young midshipman’s anxiety about the “last stitch,” the needle passed through a corpse’s nose after it is sewn into its hammock, is straight out of White-Jacket, chapter 80. On the other hand, Melville would probably have loathed the movie, because only the officers are fully conceived characters. The common sailors are no more than congeries of cliches: they work heartily, sing jollily, believe superstitions, and prefer tough discipline without quite understanding why it’s good for them. There are some indications about the tension between the sailors and the midshipmen—the very young men of a superior social class, out of whom officers are groomed, and whom, even in their tadpole stage, the sailors must obey. But the late battle scene in which a blond twelve-year-old midshipman commands a score of adult sailors seems to be a kind of fantasy about concord between the classes; given the same material, Melville would not have failed to exploit the ambivalences. After all, in White-Jacket he refers to midshipmen as “boy-worms.”