I’ve been reading Edmund Wilson’s analysis of how well Karl Marx’s social theories suited his psychological needs as an ambitious writer who was chronically broke and less than honest with himself about money. Wilson: “If you choose to work for humanity, if you will not write for money, why then you must make other people earn it for you or suffer and let others suffer, because you haven’t got it.” Ouch.

I was reminded of a half-baked idea that occurred to me while I was living in Prague, a dozen years ago, when socialism had been so recently overturned that capitalism had not yet set in. It seemed to me then that for a struggling writer, socialism was in fact an awfully convenient arrangement. Under capitalism, a writer who is not (yet) a great success is subject to doubts and slights that force him to wonder if he wouldn’t be better off if he gave up his abstract ambitions and settled on something practical. If he makes the experiment of taking a job, however, he discovers that for him there are two sorts: the intellectually untaxing ones, which pay poorly and to which an unspoken but persistent discredit is attached (surely people think less of him for failing to challenge himself), and the taxing ones, which leave him no time and energy to write anything serious.

Under socialism, though not quite for the reasons that its designers intended, he faces no such choice. The intellectually taxing jobs do not pay very much more than the untaxing ones, and what’s more, they are complicit with a totalitarian regime and therefore have only a negligible social prestige. So he is free to take an easy job and work at it lackadaisically, reserving his strength for his writing. The catch, of course, is that under socialism, no great success awaits any talent, no matter how exceptional, and so the writer will probably treat his art as a hobby in the end. And then there is the problem of free speech, which some writers stickle at. People with no interest in writing, forced to live under a system that spares writers the humiliation of being so much more poorly dressed than everyone else, in fact do resort in large numbers to hobbies in order to find happiness—collecting, gardening, drinking, adultery.

Of course there were many things about socialism worse than its overindulgence of the brittle narcissism and unresolved dependency issues of aspiring writers. But if only Marx could have been treated by Kohut. . . .

En route to the subway this morning, I passed a storefront under renovation, where a crew was installing one of those metal security grilles that scroll up like a window blind. About a dozen stuffed animal toys were attached to the radiator of their truck: a few Warner Brothers characters, but for the most part anonymous and sweet-looking. I’ve always been curious about these stuffed animals on trucks. A friend once told me that they were called “mungo,” but I’ve never spoken to anyone who could confirm that. They look playful, but what kind of play? Are they meant as mascots? Trophies? Victims? Pets?

An attractive Latina with dyed-blonde hair in a brown-and-white-print summery dress crossed the street, and one of the men wolf-whistled at her. His co-workers joined in, but she paid no attention. The man who started the whistle seemed to be at loose ends with the lack of response, and he turned to the stuffed animals and fiddled with them. They must have been attached to the radiator only loosely, because he swiveled several of them, straightening them so that they stood upright and face forward.

Actually, only the first two of the photos below were taken today. But the immediacy is disconcerting. It’s a little unreal to think that someone I’ve known for years took these photographs in Iraq this morning, and I’m looking at them after lunch in the safe haven of Brooklyn. I know that this collapse of distance happens daily in newsrooms, but it takes some getting used to. All of these photos have been taken by T. R. Klysa, USMC, who also provided the information in the captions. (Note of caution: Some viewers may find the image at the bottom left to be difficult.) 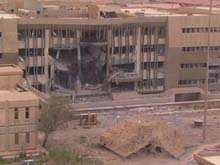 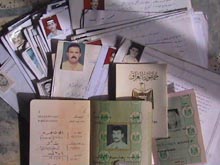 Former Iraqi Directorate of Special Security, Baghdad, April 19, 2003. Left: “Can see pretty clearly where the cruise missile drove right through the front entrance of this building.” Right: “Literally, tons and tons of paperwork. Dossiers. Files. Binders. The paperwork here is a mix of political prisoners and Baath party leaders—all mixed up. It is very unlikely any of this will ever get sorted out. This was
taken from a pile marked ‘burn.’ “ 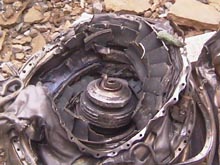 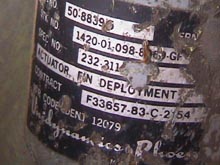 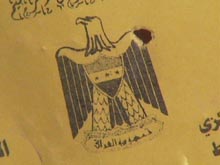 A friend of mine, T. R. Klysa, USMC, recently sent me a few photos that he's been taking with his digital camera. 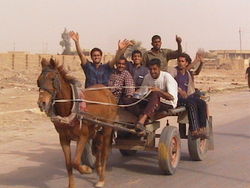 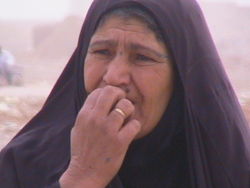 Above left: Baghdad, traffic circle. April 9, 2003. "These people are on the way to loot the Iraqi Tobacco warehouse just around the corner, that's why they are so happy."
Above right: Saddam City, Baghdad. April 9, 2003.
Below: At the Al Quds power plant, North Baghdad, in front of an untoppled statue of Saddam Hussein. April 15, 2003. 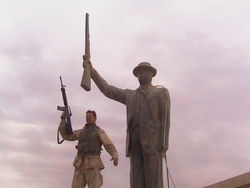 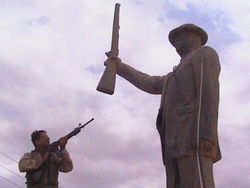 I just finished Greenery Street by Denis Mackail, which is a novel about a young couple who have just been happily married. And that’s it. There is a little bit of plot, but it only happens to the minor characters. The hero and heroine are unmitigatedly nice to each other. Miraculously, it is riveting. It has been reprinted by Persephone Books, and so in reading it on the subway I had the added pleasure of knowing that mine was the most delicately designed paperback on the F train. For instance, the endpapers for Greenery Street reproduce a 1925 chintz and look like this:

I also am infatuated with Miss Pettigrew Lives for a Day by Winifred Watson. A failed governess, on the verge of the workhouse, is hired by a flapper and discovers cocaine, promiscuity, rouge, and the pleasure of shedding one’s scruples. If you buy the books from amazon.co.uk, the shipping is cheaper, but if you buy direct from the press you get pretty bookmarks and the catalog.