I reviewed James Polchin’s Indecent Advances, a history of antigay violence and the homosexual-panic defense, for the New Yorker website.

I wrote a review of Hugh Ryan’s new history When Brooklyn Was Queer for the New York Times Book Review.

Update: The review appeared in the print edition on Sunday, 19 May 2019.

For the 24 June 2018 issue of the New York Times Book Review, I wrote about Peter Ackroyd’s Queer City, a history of London’s two thousand years of nonconformity in gender and sexual orientation.

One weekend in 2001 or 2002, I was leafing through old photos in an antiques shop on Fifth Avenue in Brooklyn, long since shuttered, when I found a group of black-and-white snapshots of a handsome young man. From the evidence of the photographs, he had served in the armed services during World War II, and he was so beautiful I wanted to buy all the photos. I no longer remember the price but they couldn’t have been more than a couple of dollars apiece. I was broke, unfortunately, and had to choose. Here’s the one I brought home: 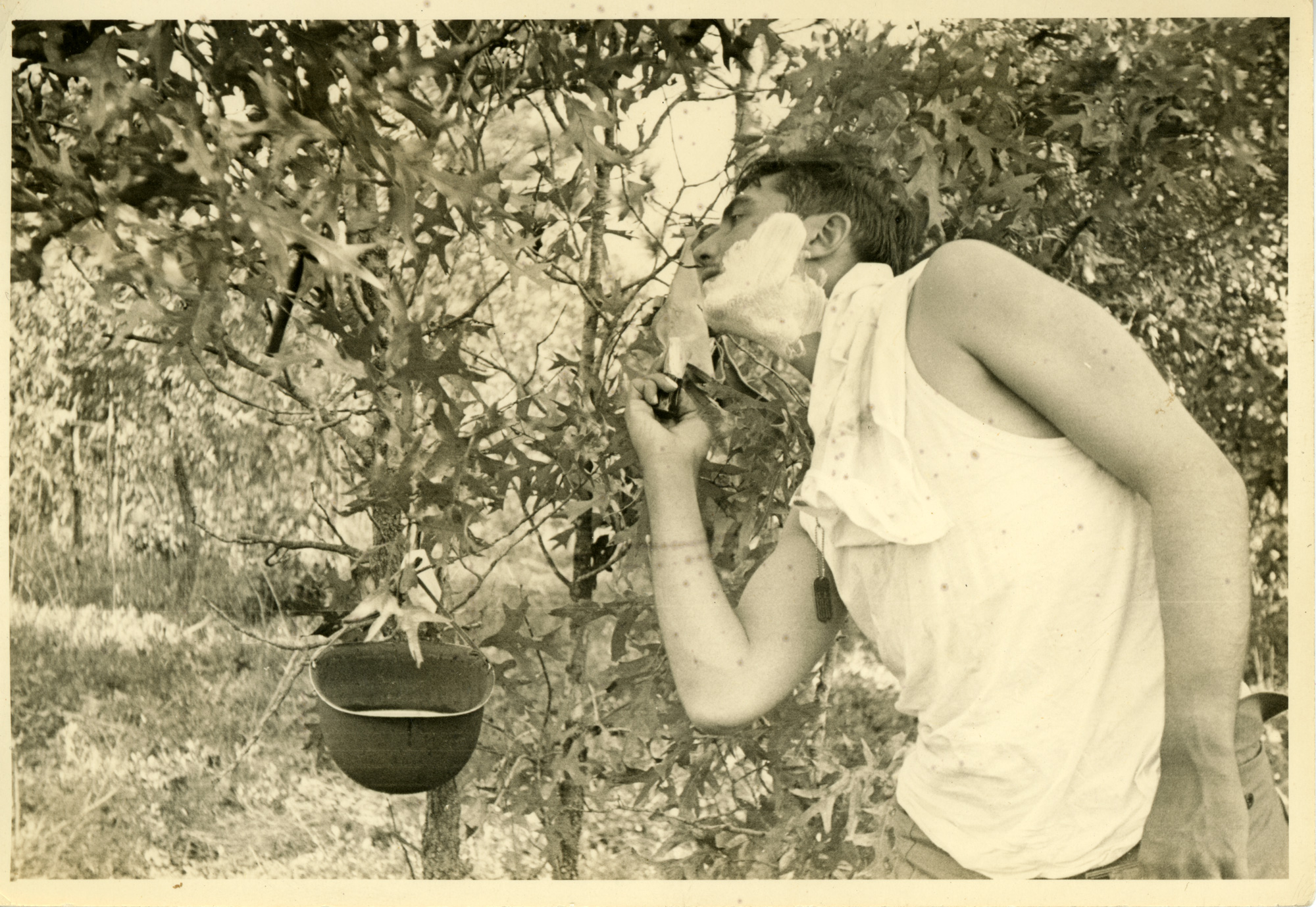 It’s a little difficult at first to see the mirror that the soldier is looking into as he shaves. It’s hanging from one of the oak trees in front of him, and because it’s sideways to the camera, it appears as just a dark line, a little slanted from the vertical. The soldier’s satchel is hanging in a tree to his right, which from the camera’s perspective is behind him; a triangular flap of the satchel somewhat confuses the image around the shaving brush and the soldier’s chin. He’s using his helmet as a water basin.

Who was he? And who took the photo? Maybe if I had bought the whole set of snapshots I would have been able over time to puzzle out answers to these questions. He stuck in my mind, for reasons that I probably don’t need to spell out.

I’m not a very organized collector of photographs. At some point, for safekeeping, I slipped the snapshot photo between the pages of a book. Then I forgot which book. I played this game for a while. I would take The Poems of Alexander Pope off the shelf, and unexpectedly, there the soldier would be, in all his glory—Alexander Pope driven from my mind.

My boyfriend (later, husband) worked in those days as a book review editor for the Long Island newspaper Newsday, and one day in 2004, he brought home At Ease, by Evan Bachner, a coffee table book, no longer in print, of sailors lounging in dishabille in training camps and on board destroyers during World War II. I paged through with a mildly historical and not terribly high-minded interest until I hit this photo:

It’s all kinds of a showstopper, as you can see. It was the sight of this photo, in fact, in an exhibit at the Brooklyn Museum, that spurred Evan Bachner, the author of At Ease, to visit the Still Pictures branch of the National Archives and Records Administration in Maryland, sift through their collection of photographs taken during World War II by the Naval Aviation Photographic Unit, and compile his book.

To be scrupulous about attribution, the source of the image you see just above isn’t Bachner’s book but a platinum print of the same photograph for sale from the Scott Nichols Gallery in San Francisco. By the way, there’s also a gelatin silver print of the same image available from the Clamp Art gallery in New York, which I saw at the AIPAD photography show a couple of weeks ago—my spur for at last writing this long-delayed blog post.

From Bachner’s book and the photography dealers’ listings, a little information about this photo of a naked gunner can be gathered. It was taken by Horace Bristol, who in the 1930s took pictures of Dust Bowl migrants in the company of John Steinbeck, providing the writer with inspiration for The Grapes of Wrath, and during World War II took pictures for the government with a team led by Edward Steichen. Here’s Bristol himself on location in what looks like the South Pacific:

Bachner reports that in the National Archives, Bristol’s image of the naked gunner bears this caption:

The photo has become fairly popular on the internet, and a number of websites, including the U.S. Naval Institute blog, reprint a paragraph from an interview with Bristol in the December 2002 issue of B&W magazine:

We got a call to pick up an airman who was down in the Bay. The Japanese were shooting at him from the island, and when they saw us they started shooting at us. The man who was shot down was temporarily blinded, so one of our crew stripped off his clothes and jumped in to bring him aboard. He couldn’t have swum very well wearing his boots and clothes. As soon as we could, we took off. We weren’t waiting around for anybody to put on formal clothes. We were being shot at and wanted to get the hell out of there. The naked man got back into his position at his gun in the blister of the plane.

As far as I know, the naked rescuer has never been identified.

I didn’t know any of this when I first saw the photo. My first reaction was a more personal and uncanny one: I recognized him. 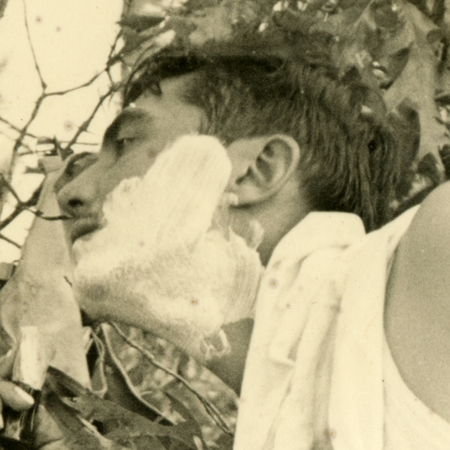 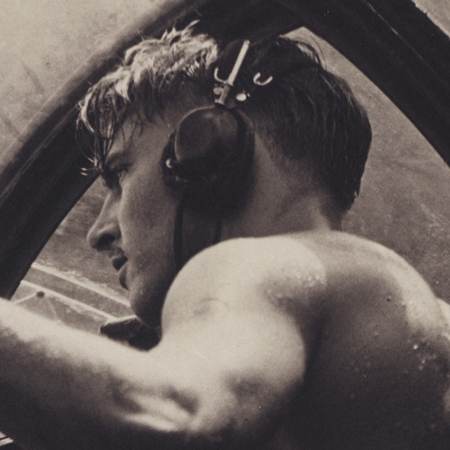 In my snapshot, the camera is looking from a lower angle than it is in Bristol’s, but the lines of the cheekbones match, as do the shapes of the eyes, eyebrows, noses, and chins. (It’s too bad that the ear of the man in Bristol’s photo is covered, because pinnae are distinctive and would probably prove or disprove the case.) The two men have the same moustache and roughly the same haircut. Ignore the chicken-pox-like spots on the arms of the man in the snapshot, including the one on his upper left cheekbone, because they’re blemishes in the emulsion not the original image. The only substantial differences I see are that the man in Bristol’s photo is more muscular and the aperture of his nostril is wider. But military training could have built up the man’s physique, and his nostrils might have been flaring, during Bristol’s photo, from the adrenaline rush of the rescue he took part in.

My hunch is that it’s the same man, though I acknowledge I can’t prove it. I wish I knew what became of the rest of the snapshots in that antiques shop—and who took them, and why.

In the 1590s, the poet Michael Drayton wrote Peirs Gaveston, Earle of Cornwall, a long poem about a 14th-century courtier who was the favorite and probable lover of Edward II (and whose first name is usually spelled Piers). Most of the poem is in Gaveston’s voice, but a few pages from the end, Drayton imagines King Edward mourning Gaveston in extravagant, almost histrionic terms:

O heavens (quoth hee) lock up the living day,
Cease sunn to lend the world thy glorious light,
Starrs, flye your course, and wander all astray,
Moone, lend no more thy silver shine by night.

Drayton’s Edward goes on to make similar demands upon the earth, the sea, the air, the wind, beasts, birds, fish, worms, meadows, mountains, groves, fountains, furies, spirits, ghosts, gods, devils, men, eyes, head, heart, hands, poets, and shepherds. Drayton seems to have been a big fan of the catalog as a rhetorical device. It’s possible that he sent his rhetoric over the top as a way of commenting on the character of Edward II, whose judgment seems to have been strongly colored by his emotions; it’s also possible that Drayton himself relished the sound of emotional extremity.

The stanzas remind me of W. H. Auden’s 1936 poem “Funeral Blues.” There, too, a poet mourns by making a somewhat absurd catalog: the speaker orders the silencing of clocks, dogs, telephones, pianos, and instructs airplanes, doves, and traffic police to join him in mourning. Auden seems to have been playing with the effect of hyperbole more consciously than Drayton did, and seems aware of the sense of irony that hyperbole naturally induces in readers. Can one be taken seriously, even in extremity, if one talks so absolutely? In the moment of bereavement, does one want to be taken seriously?

The stars are not wanted now; put out every one,
Pack up the moon and dismantle the sun,
Pour away the ocean and sweep up the wood;
For nothing now can ever come to any good.

John Fuller, whose commentaries on Auden’s poems are usually comprehensive, makes no reference to Drayton as a possible source for Auden, and the echo might of course be coincidental. But before Auden’s day—in fact, until very recently—there weren’t all that many elegies for gay lovers, and it seems possible to me that Auden had Drayton’s example in mind.