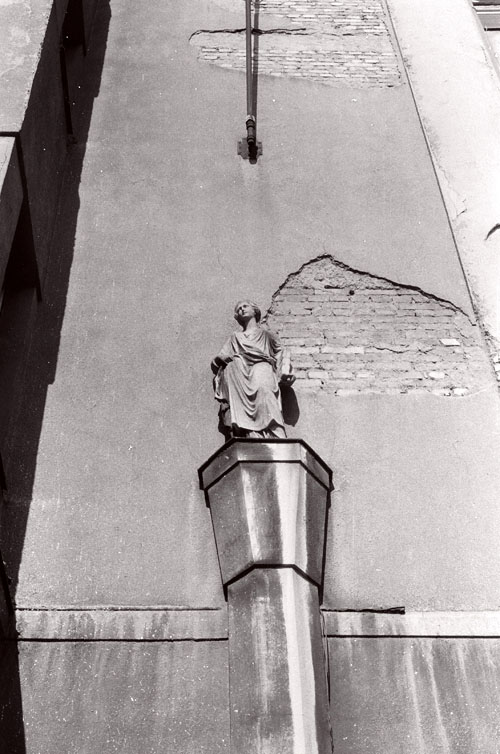 A photograph from 1990 or 1991 of an unidentified saint on a pedestal.

If this image were included in an extra-illustrated binding of the novel Necessary Errors, the binder would be at liberty to position it pretty much anywhere. (For an explanation of extra-illustration, click here.) 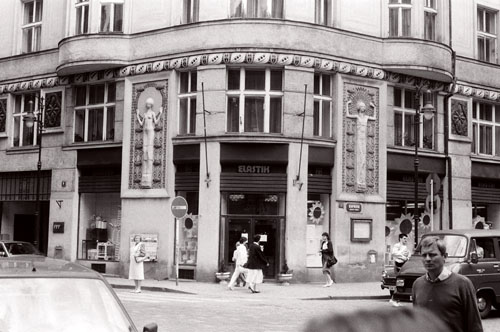 A photograph from 1990 or 1991 of reliefs by Richard Luksch on the façade of a building on Kaprova Street in Prague.

If this image were included in an extra-illustrated binding of the novel Necessary Errors, the binder could position it pretty much anywhere. (For an explanation of extra-illustration, click here.) 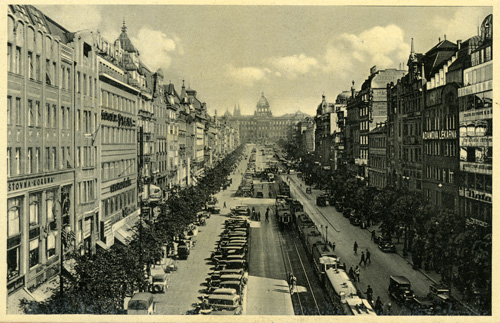 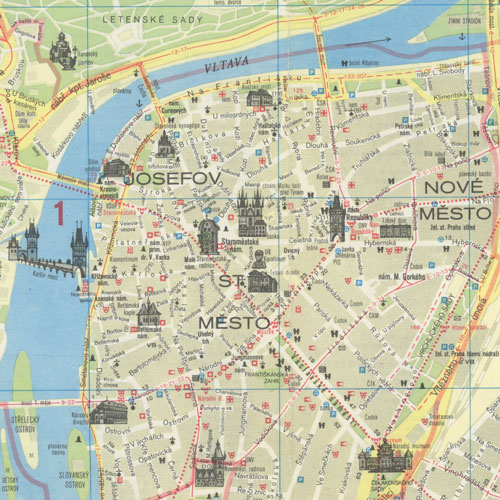 In 1987, when this map was printed, many streets and squares in Prague still bore names favored by the Communist regime. Don’t use it to navigate the city today, or you’ll get lost! Click the image to enlarge it.

If this image were included in an extra-illustrated binding of the novel Necessary Errors, it would follow page 166. Or it might be the endpapers. (For an explanation of extra-illustration, click here.)

“Of all bookish fads, that of extra illustrating is the most interesting,” the New York Times wrote on 19 June 1897. By 22 February 1903, however, the Times had changed its collective mind: “The extra-illustrator of books, when he has stalked abroad in modern days, has been a pathetic figure.”

Extra illustration was—is?—the practice of rebinding a book so as to include lithographs, portraits, maps, original manuscripts, and ephemera. It was also sometimes called “Grangerizing,” because it caught on after readers began DIY-illustrating James Granger’s 1769 Biographical History of England. Its heyday was in the eighteenth and nineteenth centuries. Because so many source materials were gathered and protected in extra-illustrated volumes, examples are prized by archivists and scholars today. The Huntington is currently showing an exhibition of extra-illustrated books, and the Folger has an online exhibit on its website.

All this is by way of saying that I’ve put together a collection of photos, ticket stubs, maps, and postcards that an extra-illustator could, if he were so inclined, bind into a copy of my novel Necessary Errors. Some are personal mementos; some I bought last month on Ebay. I’m going to be posting them on this blog in bits and pieces, over the next couple of months, under the tag “extra illustrated.” I’ll also try to post them on Tumblr, which I don’t really understand, so have patience. In each post, I’ll append binding instructions—that is, I’ll say which page the illustration should follow. But please don’t take this too seriously!