A review by Caleb Crain of Hans Christian Andersen: The Life of a Storytellerby Jackie Wullschlager. Originally published in Newsday, 3 June 2001, p. B10.

Once upon a time, in nineteenth-century Denmark, there was a shoemaker who read plays, fables, and tales from the Arabian Nights to his son. A romantic spirit, the shoemaker went off to fight for Napoleon, but when he came home from the wars, he was sickly. When the boy was eleven, his father died. The Ice Maiden has carried him off, explained the boy’s mother, a kind washerwoman who liked to drink schnapps and could not read.

Perhaps because of his father’s indulgence, the boy loved the theater fiercely and believed that one day he would belong to the world of writing and performance. Without a doubt he was different from other boys. He liked to sew clothes for his collection of dolls, and he had a voice so high and pretty that once when he sang for the factory hands at a cloth mill, the workers undressed him to see if he was a girl.

At age fourteen, the boy left his mother and traveled alone to Copenhagen, Denmark’s capital city, to join the theater any way he could. First he tried singing, but his voice broke. Then he tried dancing, but he was so lanky and gawky that the only part he was allowed to dance was that of a troll. Finally he tried writing, but he did not know how to spell, and his style was wild. In person he entertained everyone he met, but most people laughed at him rather than with him. Fortunately, his failures succeeded in charming a man named Jonas Collin, who had money from the king to spend on the arts.

Collin arranged for the boy to attend grammar school in the countryside at the king’s expense. It was rare for a worker’s child to have such a chance to join the middle class. The experience was humiliating, however. At seventeen, the boy knew less than his eleven-year-old classmates. He could not even find Copenhagen on a map of Denmark. To make matters worse, the school’s headmaster, a slovenly man whose wife cheated on him, was unkind. “You’re a stupid boy, wholl never be any good,” the headmaster told him. Nonetheless the boy learned what he needed in order to become a writer. He read Shakespeare and Sir Walter Scott, and he began to keep a diary. In 1826, he wrote a poem in the voice of a dying child. The headmaster dismissed the poem as “sentimentality and idle trash,” but it was soon printed in newspapers across Europe. The boy was freed from the torture of grammar school. He returned to Copenhagen, where his poem had already begun to earn him a name as a writer.

That name was Hans Christian Andersen. As Jackie Wullschlager, a critic of arts and literature for the Financial Times, explains in her sensitive, carefully researched biography, measured in years Andersen was now an adult, but in many ways, he was still a child—and would remain one all his life. He would never marry, he would always hunger for attention and praise, and he never settled down as a writer into just one literary form. In 1829, for example, he published a book-length fantasy travelogue, a play whose ending depended on the audience’s vote, and a collection of poems. His love of experiment would eventually lead him to invent a new kind of writing altogether.

As happens to many boys with girlish habits and a love for theater, Andersen grew up to be a man who fell in love with men as easily as he did with women. In fact, he sometimes fell in love with a brother and sister at the same time: he fell for Christian and Riborg Voigt in 1830, and for Edvard and Louise Collin in 1832 and 1833. Edvard and Louise were the children of the man who had rescued Andersen by sending him to grammar school. To Andersen the Collin family seemed so enlightened, secure, gracious, and worthy that he longed to attach himself to it however he could.

Andersen’s love—whether for women or for men—was rarely returned. His love for Edvard Collin was probably the deepest and most painful feeling of his life. “I long for you, yes, this moment I long for you as if you were a lovely girl from Calabria,” he wrote to Edvard in 1835. But Edvard never had any wish to be intimate with Andersen. In fact, Andersen’s need for a mans love left him somewhat disgusted. Many years later, after Andersen died and bequeathed Edvard an estate worth 50,000 rixdollars (around $1 million), Edvard wrote that “I cannot deviate from the opinion that the best service to Andersen is done by showing the world how diseased a mind he had.”

This is a fairly stern judgment. And yet for years scholars have argued that Anderson could not have loved men sexually, because if he had, the Collin family would have known about it and would never have allowed him to escort their young sons and grandsons on trips through Europe. Wullschlager is not afraid to say that this argument has no more substance than did the emperor’s new clothes. She sees that the Collin family could have known about Andersen, disapproved of him, and yet continued to love him in their own limited fashion.

In 1835, perhaps emboldened by the sense that his first novel, The Improvisatore, would be a success, Andersen attempted something new: a pamphlet of tales for children. The style he chose was lively but simple. “A soldier was marching along the high road: Left, right! Left, right!” began the first tale. Yet they were revolutionary. Before Andersen, people had recorded fairy tales, as if they were bird songs, but no one had written new ones. Nor had anyone written for children in a style that was so much like regular conversation. Andersen’s fairy tales begged to be read aloud.

Adults enjoyed them as much as children did, perhaps because in fairy tales, Andersen was able to write things that he had not been able to express in any of the other literary forms he had tried. In his tales, Andersen could write about the Ice Maiden who had kissed his father’s life away. He could write about his recurrent nightmares of a dying child, by describing a lonely girl, perishing of cold and hunger, who comforts herself with pretty images seen in the flames of the matches she lights. He could write about his awkward youth, by telling the story of a duckling who grew up to be a swan. And he could write about his unhappy love for men like Edvard, by imagining a mermaid who could only walk on land beside the man she loved if she gave up the voice in which she might have told him her feelings.

Critics did not at first understand Andersen’s innovation, but children did, and they made him wealthy and famous. Aristocrats and wealthy merchants fussed over him. After he discovered fairy tales, his life followed a steady path: his writing improved and deepened, while he became more lonely, fearful, and vain. He never found a love that might have broken him free of his childlike shell. In the 1840s he had a much-publicized crush on the Swedish singer Jenny Lind and then a long sentimental friendship with Carl Alexander, the Grand Duke of Weimar, who admired him, weeped with him, and held hands with him, but never challenged him. Wullschlager suspects that Andersen may have briefly found some kind of sexual fulfilment with a young dancer named Harald Scharff in 1862. But there is a sad hollowness to Andersen’s last decades. Acclaimed but not seen for who he was, he became a caricature of himself—like the shadow, in one of his fairy tales, who escapes from his master and eventually replaces him. Thanks to Wullschlager’s research and insight, however, one may at last glimpse the unhappy, creative man. 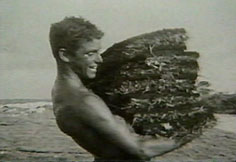 A friend alerted me to this, and confessed that her Clarkish tendencies were endangered by it. The sheer giddiness of the Dean campaign is impressively Kennedy-esque. (For some not-too-serious gender analysis of the candidates, look here.)

Since Fit to be Tied is kind enough to remember it, and since it was sitting around on my hard drive, here’s my superannuated essay on cannibalism, homosexuality, and Herman Melville. It was published almost exactly a decade ago, and lots more is known about all the topics involved, though not perhaps by me. Anyone interested might, for a start, track down the latest issue of Melville Society Extracts and look at Henry Hughes’s report on a July 2003 conference on Melville held in the Marquesas, where Robert Suggs (whom I footnoted, ten years ago) led an expedition.

Scott McLemee has a nice retort to the backwash from his recent lampooning of the MLA. (Ahem, Scott. There is no way to link to a particular entry on your blog. One must link to the blog entire. Ahem.) Lost in the kerfuffle about the difficulty of literary theory, he writes, is the fact it isn’t, really. Much of it is “the merest psitticism,” he writes. (But wouldn’t that be “psittacism” with an a? In a previous life I was a copy editor.)

Today I learned from Emily Nussbaum that over 95 percent of blogs are written by people age 29 and under. Thus mine is rare and special. I also learned that if I were a teenager, I would be more
Miscellaneous in format. In that spirit I offer a mix tape, or rather, a list by which you might assemble one. (Aside in blogese: The other day I noticed that if you link to anything with the string mp3 in the URL, within twenty-four hours the spider of the RIAA deposits a nit in your referers page. Scary.) This is not a “top ten,” I hasten to assure Luke Menand, and anyone else who finds them upsetting. The title of this mix is “Extra Biscuits.”