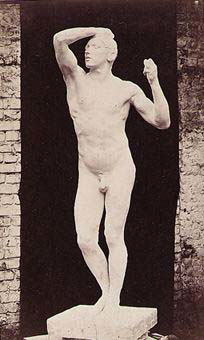 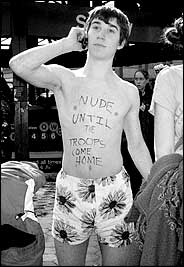 Right: Melanie Einzig’s photo of a protester in Union Square, from the New York Times City section of March 23.

. . . says Tom Cruise to Kelly McGillis, just before he doesn’t make love to her. Last night Peter and I rented Top Gun, not for its topicality, which was mildly unnerving, but because we had put it on our Netflix queue ages ago. Neither of us saw it when it came out in 1986—in my case, because I was closeted and wary of the homo subtext that the movie was rumored to have. The homo subtext is indeed formidable (rather often a male hand trails rather loosely across another man’s shirtless back), but what struck me most was the crass instruction that the movie offered to insecure straight men. (In this it’s much like Jerry Maguire.)

The most salient feature of Maverick (Cruise) in Top Gun is how short he is. There’s scarcely a frame in which he isn’t the tiniest person, Charlie (McGillis) included. His fellow pilots tower over him, and his enormous smile looks not so much like generosity of spirit as the defensive gesture of someone cornered. He flashes it when attacked. The dilemma of being Maverick is this: if you are short, have no father, lack impulse control, and cannot sing, how will you ever get laid? The answer is that you will turn two of your vulnerabilities into strengths: low impulse control will become a willingness to take risks that others won’t. This transformation is easy for Maverick, and he’s a little too fond of it. But the second is trickier: His wish for a father is to become an ability to bond tightly to his comrades. Herein lies the lesson, and it is unlovely. Maverick’s bonding is too personal; it’s really only to Goose, his “rear man,” whom the filmmakers have made ugly, to deflect suspicion. Maverick must eliminate the component of his love that is attached to a particular beloved. He must learn not to care when Goose dies.

Thus the emotional nonsense of the movie’s opening scene, when a pilot named Cougar freaks out, during a dogfight, and can’t pull himself together to land his plane but merely stares fixedly at a photo of his wife and children. I say nonsense, because presumably the thought of his wife and children would be an incentive to Cougar to rejoin the living. But instead the thought of them seems to tempt him to die at sea. That’s because the scene has no coherence of its own but is merely a setup to Maverick’s decision, in a later dogfight, not to die at sea as Goose did—not to “follow his leader,” as Melville might have put it.

If Tom can do this—and “this” is not mourning, it’s something quicker and more brutal, like cauterization—then he can have Charlie (McGillis). Note that for as long as it seems that he can’t do this, she rejects him, with a heartlessness that would be a flashing red alarm if a real woman were to display it. But she isn’t a real woman, she is the goddess of reproductive success, available to all who can accurately simulate alpha-male status. Maverick isn’t really an alpha male (note his prompt decision to become a professor once his warrior bona fides are proven), which is why the audience roots for him in his struggle to appear to be one.

Here’s my NYT review of Jackson Lears’s Something for Nothing.

There were typos in the first printing of my edition of The Algerine Captive by Royall Tyler (Modern Library Paperback Classics, 2002). Here’s a list of how to fix them. (The errors should be fixed in the second printing, and I’d be pleased to hear from anyone who has one. The book is available for sale at Amazon and Barnes & Noble)

We chose not to regularize Tyler’s spellings, so inconsistencies such as “Gibraltar”/”Gibralter” and “ancient”/”antient” are deliberate. Corrections marked with an asterisk are of 1797 printer’s errors; the rest are of errors new to the 2002 text.